Match preview ahead of Leeds United's game with Ipswich Town at Elland Road.

We've just had F.A Cup weekend which means Brian McDermott's men had the weekend off following their defeat at League Two Rochdale in the third round.

The Whites are back to it on Tuesday night though as Mick McCarthy's Ipswich side visit Elland Road. The Tractor Boys got their first victory in seven at the weekend with a 2-0 win over Reading but the good news for the Whites is that they haven't won any of their last three on the road.

United have lost their last five in all competitions but haven't lost six in a row since 2004. Not only have the results been hard to come by but so have the goals and the Elland Road club, without a win in seven games, have only scored three goals during that run. Brian McDermott needs his players to stand up and be counted in order to stop the rot.

Matt Smith sits out the second of his three game suspension against Ipswich. Alex Mowatt and Luke Murphy will be hoping to be involved after the pair were both recently dropped from the side.

For the visitors, Frazer Richardson, the United academy graduate, could make his Ipswich debut after joining on loan from Middlesbrough. Should he do so, it will be Richardson's second appearance at Elland Road this year after he was involved in Boro's 2-1 loss in West Yorkshire back in November.

Captain Carlos Edwards has recovered from a groin strain in time to travel with the squad. 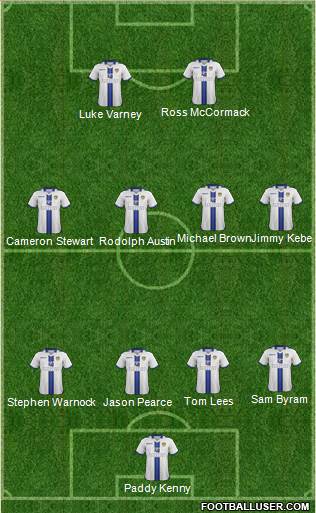 Despite being on the end of another defeat last time out against Leicester, it was a much improved performance from what we have seen in the last month and I would expect Brian McDermott to name an unchanged side.

Ipswich are just outside the play-offs in seventh place but a win for United can take them within a point of them. It's not as simple as that for Leeds at the moment though as Brian McDermott hasn't tasted that winning feeling since the 14th December when he saw his side run out 3-0 winners at Doncaster. The fans could really do with something to cheer following a dismal run of results and with the takeover dragging on off the field but I think Ipswich will take a point away from Elland Road.