Match preview ahead of Leeds United's trip to Hillsbrough to face Sheffield Wednesday.

United are back in action for the first time since their abysmal 2-0 defeat at Rochdale this Saturday Lunchtime. It's a short trip to Sheffield where Brian McDermott will be armed with two new signings after Cameron Stewart and Jimmy Kebe, both wingers (YES! WINGERS!) joined initially on loan this week. The encounter is sure to be a tense one following dramatic scenes in this fixture last year which saw Chris Kirkland receive a push in the face from a spectator following Michael Tonge's spectacular equaliser.

Sheffield Wednesday have only won one of their last seven home clashes with Leeds but McDermott's men haven't won any of their last five matches and are in desperate need of a win to remain in touch with the Play-offs.

Jimmy Kebe and Cameron Stewart are both in line to make their Leeds debuts at Hillsbrough this weekend.

Alex Mowatt and Tom Lees will both be hoping for recalls whilst there could be further changes following the terrible showing last weekend at League Two Rochdale.

The hosts may be able to call on the services of Connor Wickham after he missed last weekends draw at Macclesfield in the F.A Cup.

Meanwhile Caolan Lavery may be involved after being recalled from his loan spell at Plymouth. 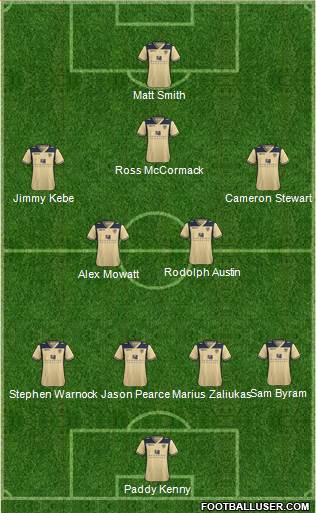 For a long time now, this section of my preview has been easy. The manager has made very little change to his side or formation but for this game, especially after the signings that have come in, I just have no idea what will happen.

It's a long time since we have played with a flat back four but if Brian McDermott opts to start with both new signings on either wing we could revert back to that. If he does go with 2 wingers then Matt Smith should keep his place in the team for me, what would be the point in having two wide men getting the balls in the box if we didn't have our big man to nod them in?

For some reason I also think we will see the return of Stephen Warnock tomorrow but I am probably well wide of the mark. The manager has plenty of options now but one thing is for sure, big changes are needed following a terrible run of results.

This week has been the worst in a long while to be a Leeds fan...and that is saying something! Last week was horrendous, it wasn't so much the result, it was the fact we were completely outplayed and outfought by a team two divisions below ourselves. There needs to be a reaction tomorrow in a Yorkshire derby, away from home, the sort of game the Whites typically pick up very little from. However, United have wingers for the first time in almost two years and hopefully they can help create the spark that has been missing. I'm going to back Leeds to get a much needed three points and silence one of the many teams that love to hate us.