Match preview ahead of Leeds United's game with Bolton Wanderers at the Reebok Stadium.

The International break is over and United travel to the Reebok Stadium to face Bolton Wanderers this weekend. United have had to wait two weeks following their first defeat of the season to QPR last time out and Brian McDermott will be looking to make amends against a Bolton side who sit bottom of the Championship.
This is only the Whites second visit to the Reebok Stadium since 2004 when they lost their Premiership status there. United supporters will be hoping for some fonder memories of the place come 5pm on Saturday evening.
Team News:
Sam Byram is well on the way to a return to first team action having missed the whole of pre-season with a hip problem. However, the young star is likely to have to wait until after the clash with Bolton as he continues his comeback in the development squad.
Other than that Brian McDermott has a full strength squad to choose from with Ross McCormack, Paul Green and Rodolph Austin all returning from International duty unscathed.

"Ross didn't play midweek, but he played a small part for Scotland at the weekend and he's okay. Paul played the other night for the Republic of Ireland. I watched the game and he played very well.
Rudy was suspended for Jamaica's game in midweek, but he will be back with us on Friday so we should be in good shape." Said the manager speaking to the club's official website.

Chung-Yong Lee, Jermaine Beckford, Medo Kamara and Adam Bogdan will face late fitness tests. If the latter misses out this is likely to see a game for Andy Lonergan against his former employers.
Meanwhile, Chris Eagles (ankle), Marc Tierney (groin) and Tim Ream (hamstring) are all fit and available for selection.
My Predicted United Line-up: 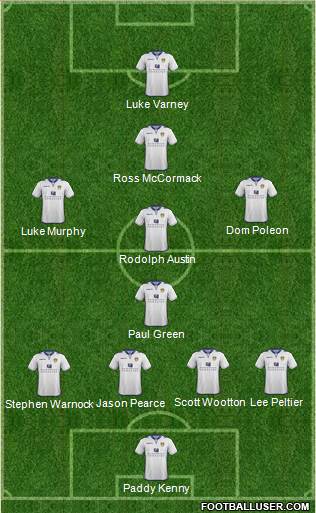 I think we will see a similar side to the one which lost to QPR. However I think Noel Hunt, who has come in for some stick, will lose his place to Dom Poleon.