With more and more improvements coming to the site, here's another one just for you lucky readers. New writer Jacob Tose will be analysing the opposition each game. Here's his first piece for our League Cup clash against Chesterfield.

Share All sharing options for: Leeds vs Chesterfield – Pre-Match Analysis

The ‘Capital One Cup’ is undoubtedly my least favourite competition. It’s a competition that the big teams aren’t particularly interested in winning, while non-top flight teams are burdened with the pressure of a hectic schedule (what with the 46 league games already in place). However, so early in the season it is vital for teams to get into winning habits – if there is such a thing. Therefore with Chesterfield and Leeds both getting off to a winning start on Saturday, the managers will be urging their teams on to keep that momentum going, even if the Cup is not their top priority.

Chesterfield, with Paul Cook at the helm, finished in a respectable 8th place last season and only two points outside the play-offs. Since Cook’s arrival in late October 2012, The Spireites have had a very impressive win percentage of 45% (Warnock only managed 36% at Leeds during his tenure) which has earned them respect through the world of betting odds as they sit as second favourites for promotion on most betting websites (behind Fleetwood Town). It is clear that the League Two outfit are no pushovers. However, for all their achievements and expectation in League Two, they still should not theoretically trouble a strong-looking Championship side.


How will Chesterfield line-up? I believe Cook will play much the same team as the XI that beat Bury 2 - 0 on Saturday. It is true that he won’t want to expose some of his players to too much football so early on in the season – especially bearing in mind that as a League Two side they have to take part in The Johnstone’s Paint Trophy too. But they will still want to put on a good show for the visiting Spireites and they’ll want to progress in the hope that that they can draw a team at home that will give them a big gate at the Proact Stadium.

The changes I am confident they will make are at the back. I assume, if fit, former Blackpool centre-back Ian Evatt, who has Premier League experience, will come into the starting line-up for 19 year old Ryan Edwards, who is on-loan from Blackburn. Chesterfield will presumably play their same formation of 4-2-3-1 with Marc Richards leading their line on his own. Richards netted 12 in the league last season and scored against Bury on Saturday. Ryan, a former League Two Team of the Season member (2010-2011) will play just behind Richards in the hole. I believe though he will become part of a rigid five man midfield with the wingers (Roberts and O’Shea) tucking in when without the ball however, in an attempt to stifle Leeds’ football and not allow them to become confident in possession. 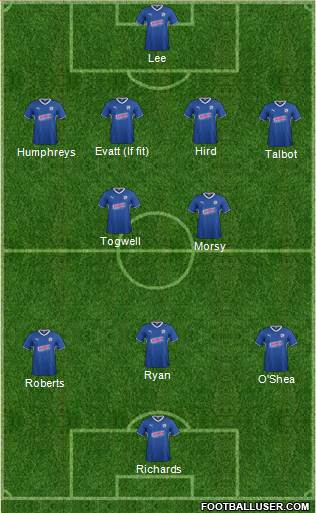 Chesterfield have very much adopted a passing philosophy under Cook and First Team Coach Kevin Lynch said of their philosophy "Good players find time and space to play in and we’ve got good players at this club". I believe Jimmy Ryan, who has just signed from Scunthorpe United will be their key player and one to watch. Hopefully with Green playing a holding role in midfield for the Whites, he’ll be able to snuff out any threat posed by Ryan.

The Leeds line-up is anybody’s guess so far. Changes that I am confident will happen are Matt Smith will come in and make his first start, replacing Varney. Drury in for Warnock, and I believe McDermott will want to give Norris a run out, possibly in the place of Tonge. 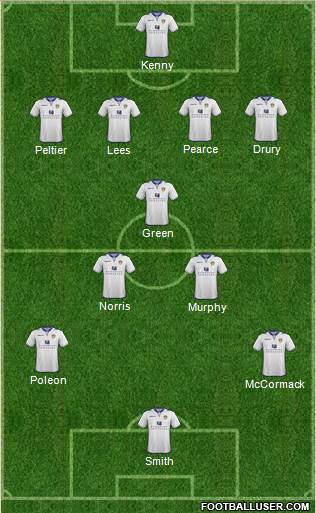 Despite Chesterfield’s threats, Leeds should win this one and they will do as long as they stay disciplined, and work hard when without the ball. In previous meetings Chesterfield have the edge, beating Leeds four times, with Leeds only managing three wins. This, though, is a stat which means very little to Brian McDermott and the new era at Leeds. There will be a lot of experience in the team on Wednesday and I think that will shine through. My prediction is a 3-1 Leeds win.