Match preview ahead of Leeds United's clash at home to Chesterfield in the Capital One Cup.

It's back to Elland Road again on Wednesday night as United face League Two Chesterfield in the first round of this season's Capital One Cup. This is the first meeting between the two sides since 1960 when United eased past Chesterfield with a 4-0 win in the third round of the League Cup.

The Whites started the season with a dramatic 2-1 win over Brighton on Saturday and Brian McDermott will be looking for his side to utilise the feel good factor that has been around Elland Road lately to ensure his side achieve a safe passage to the next round.

The game comes too soon for El-Hadji Diouf who has missed the whole of pre-season with a shin injury. However, the Senegalese attacker will make an appearance in a behind closed doors friendly with Burnley tomorrow.

Rodolph Austin serves the final of his three match suspension against Chesterfield but will be available as the Whites return to league action on Sunday at Leicester.

Meanwhile, Stephen Warnock picked up an injury against Brighton on Saturday which could mean a run out for Adam Drury. Brain McDermott could shuffle his pack further for the visit of Chesterfield with the likes of Matt Smith waiting in the wings to make his first start for the club.

For the visitors, Liam Cooper is being monitored having missed Saturdays game with Bury with a side strain. Former Blackpool defender Ian Evatt will also miss out with a lack of match fitness. 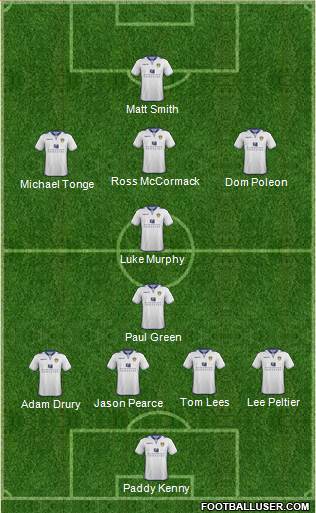 I have only gone for three changes with Adam Drury coming in for Stephen Warnock, Matt Smith in place of Luke Varney and Dom Poleon replacing Noel Hunt. Whether McDermott goes for more changes or wants to stick with something similar to the side that defeated Brighton at the weekend remains to be seen.

Without taking anything for granted, United should win this one comfortably. Although nothing is ever that simple with Leeds United, I am predicting a 2-0 home win.