QPR visit Elland Road this weekend with Brian McDermott looking for his side to make it seven games unbeaten in all competitions so far this season. United brushed Doncaster aside on Tuesday in the League cup with a 3-1 in a game which was full of positives for the Whites manager. Leeds haven't lost to QPR since 1995 and will be looking to continue that run when Harry Redknapp and co come to town this weekend.

There are no fresh injury concerns ahead of the game with QPR however boss Brian McDermott may have a few problems choosing his starting eleven this week.

They are the problems every manager likes to have though after McDermott shuffled his pack for the trip to Doncaster in midweek. The players given their chance took it very well with youngster Alex Mowatt impressing along with new signing Scott Wootton, who made a scoring debut. Matt Smith also grabbed his first goal for the club and the manager must now decide who to pick after seeing his side make it six games unbeaten so far this season.

For the visitors, Junior Hoilett could return to the side after missing the last few weeks with a hamstring injury. Matt Phillips, recently signed from Blackpool, is out with an arm injury.

The likes of Robert Green, Joey Barton, Karl Henry and Richard Dunne sat out the League Cup defeat against Swindon in the Capital One Cup and should return to action at Elland Road. 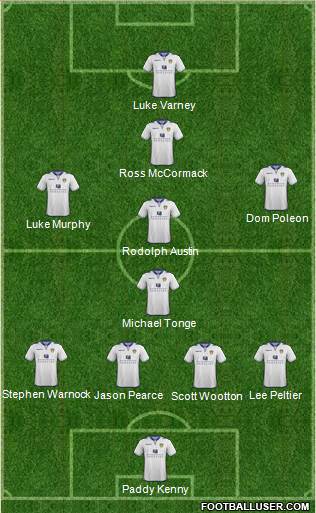 I think the manger will stick with Scott Wootton after his impressive debut. I also think Michael Tonge and Dom Poleon will keep their place in the side ahead of Paul Green and Noel Hunt respectively.

It's going to be United's toughest test yet as two unbeaten sides go head to head at Elland Road. Unfortunately I have a feeling that we may see United finally beaten this weekend by Harry Redknapp's QPR. However, I hope I am wrong and if the Whites play like they did on Tuesday night at the Keepmoat they are more than capable of taking something from this game.