Match preview ahead of Leeds United's short trip to the Keepmoat stadium to face Doncaster Rovers in the second round of the Capital One Cup.

Leeds United travel to Doncaster in the Capital One Cup this week with confidence continuing to grow after goals from Ross McCormack and Luke Varney at Ipswich ensured the Whites made it 5 games unbeaten so far this season.

This fixture is a repeat of two years ago when two goals from Ramon Nunez sent United into the third round of the cup and set up a game with rivals Manchester United.

The Whites enjoyed a good run in the League Cup last campaign before eventually being knocked out by Chelsea in the Quarter-Final and Brian McDermott will be hoping to progress and keep his side on their unbeaten run.

Scott Wootton is set to make his Leeds United debut at Doncaster. Speaking to the club's official website, Brian McDermott had the following to say:

"Scott is going to start. Dioufy will be in the squad as well, but that is as much as I'm going to give away at this stage.

I will make changes, but I want a balanced team that will compete. We'll have a good following going over and I want to win the game for the fans."

The manager confirmed there are no new injury concerns ahead of the clash with Doncaster.

Paul Keegan was sent off for the hosts in their game with Charlton which was abandoned at half-time. Despite the goals being wiped from the history books, the red card stands and Keegan will miss the game. 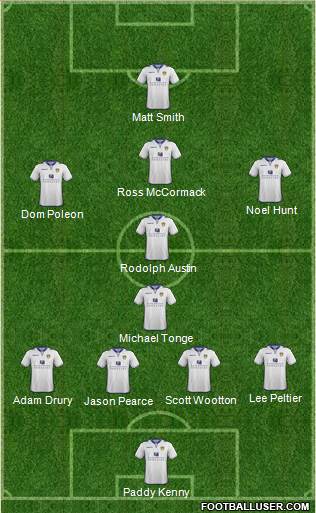 I think the manager will shake things up a bit again for the cup. I have included Adam Drury, Michael Tonge, Matt Smith and Dom Poleon in my starting eleven. Whether El-Hadji Diouf is fit enough for his first start of the season remains to be seen. Brian McDermott could decide to give a run out to the likes of Zac Thompson.

Doncaster have started life back in the Championship fairly well and will be confident of knocking United out of the cup. Hopefully United's Yorkshire rivals won't be allowed to vent their frustration following Saturday's game being abandoned with them in a 3-1 lead and if the Whites are as solid as they have been thus far away from home, I think Leeds will be in the next round of the cup.