Leeds United and Sheffield Wednesday played out a 1-1 draw in the Saturday lunchtime Yorkshire derby. Read the match report here.

Leeds United hosted Yorkshire rivals Sheffield Wednesday at Elland Road on Saturday lunchtime in a game that was live on Sky Sports.

There was one change to Brian McDermott's starting line-up as Dom Poleon came into the side in place of Noel Hunt following United's 0-0 draw away at Leicester City last weekend. El-Hadji Diouf also returned to the squad after missing the whole of pre-season with a shin injury and took up his place on the bench.

After last weeks stalemate at the King Power Stadium, this game started in a similar fashion as both sides seemed to be cancelling each other out. Sheffield Wednesday full back Lewis Buxton was beginning to have a torrid afternoon as it seemed United youngster Dom Poleon easily had the beating of him. Unfortunately for the Whites, there was no end product to Poleon's runs and the opening stages came and went with United unable to create any clear cut chances.

Soon after Athde Nuhiu was unlucky to see his effort repelled by Paddy Kenny, who was in the right place at the right time to keep the header out, Wednesday were in front. It was another corner that was defended poorly by United and Mitchail Antonio found himself free at the back post, his header back across the box was met by Kamil Zayatte who guided the ball past Paddy Kenny and put the visitors 1-0 up. 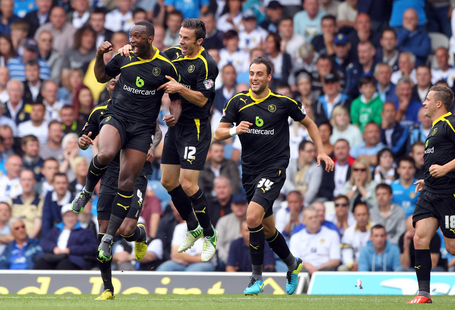 United's best effort of the half came when Ross McCormack beat his man on the edge of the box and attempted a chip over Chris Kirkland. The former England keeper was equal to it though and tipped it over the bar. In truth, it could have been 2-0 by half-time. Yet again it was a corner that was to cause United the problem and despite Paul Green and Stephen Warnock covering the back post, it was Antonio that got his head to the ball and the Wednesday man really should have made it 2 but his effort was off target.

The disappointing Paul Green was replaced by Michael Tonge at half-time as Brian McDermott looked to get his side back into the game. It was McCormack, who is usually the driving force behind United's attacking play, that set up the first chance of the half for Luke Murphy. United's number 44 teed up Murphy on the edge of the box but the former Crewe man lost his balance and his effort was blazed over the bar.

If anyone was going to bring United level, it was probably going to be McCormack. That is how it turned out to be as the Scotland international produced a real moment of magic to equalise. Luke Varney chested the ball to McCormack just inside the Wednesday half and the Scot brought the ball under control before knocking the goal past goalscorer Zayatte and using great speed to get onto the ball. After finding himself one on one with Kirkland, he made no mistake in slotting the ball into the back of the net to send Elland Road mad. 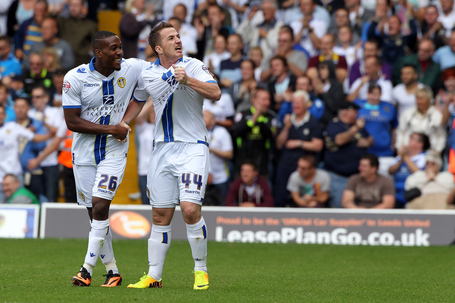 With half an hour still to play, the expectation from the home crowd was that the Whites would go on to win it, however it didn't quite work out like that. The goal turned out to be the only clear cut chance United would create all game as Tonge, Murphy and McCormack all had speculative efforts blocked or well saved by Chris Kirkland. McCormack's was the best chance after he was supplied with a pass from Michael Tonge on the edge of the area but he never really got hold of it and it was deflected for a corner.

Antonio came close for the visitors but his shot from outside the box was repelled by Paddy Kenny and the spoils were to be shared by the two Yorkshire rivals. Similarly to last week, a draw was probably a fair result in a game where neither side ever truly got going. There were worrying suggestions that GFH may be ready to sell Ross McCormack after he seemed to go over to them with his hands to his ears when he scored his goal. He clearly doesn't want to go but may have to accept it if the powers that be decide to accept an offer. He is our biggest attacking threat at the moment, it would be crazy to let him go.

Five points out nine now which isn't a bad start. Three would have come in handy today though as the Whites travel to Portman Road next to face Ipswich where they lost 3-0 last season.