Match Preview ahead of Leeds United's game with Yorkshire rivals Sheffield Wednesday in the televised lunchtime kick-off this Saturday.

It's back to Elland Road this weekend as Brian McDermott and his team look to make it three League games without defeat. Sheffield Wednesday make the short trip to LS11 and will come determined to take something back across Yorkshire after starting the League campaign with two defeats.

Brian McDermott took charge of his first Leeds United game in this fixture in a game which was turned on it's head by two quick Luke Varney headers to see United take a much needed 2-1 win. If the Whites manage to record another 2-1 win, it will ensure the visitors have lost all four League and Cup matches so far this season by the same scoreline.

El-Hadji Diouf is in contention to make his first appearance of the season. Diouf missed the whole of pre-season with a shin injury but returned to action in a behind closed doors game against Burnley and could play his part on Saturday.

There are no other fresh injuries concerns for the Whites. However, Sam Byram continues to struggle with a hip problem.

Dave Jones has three players returning to action this weekend in the shape of Reda Johnson, Lewis Buxton and Giles Coke. Johnson and Buxton both returned to training this week having recovered from tendonitis and shin splints respectively. Giles Coke missed the defeat to Burnley last week through illness but could return while Joe Mattock is ruled out with a knee injury. Finally, winger Jermaine Johnson will serve the second of his three game suspension after he was sent off against Rotherham in the Capital One Cup. 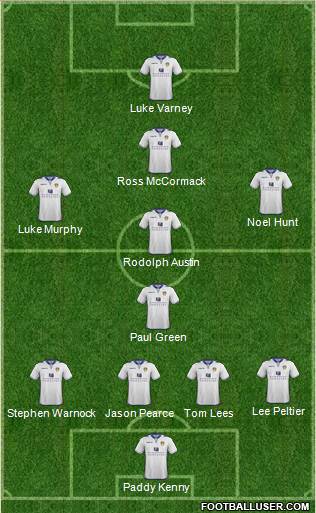 I would expect the same team that came back from Leicester with a point to line-up against Sheffield Wednesday at the weekend. I think Diouf will take up his place on the bench.

It's going to be another tough afternoon for the Whites this weekend. Sheffield Wednesday are always up for playing us and with them yet to register any points, they will be keen to get a result against the vile animals. I think United are good enough to see Wednesday off though, I'm going for a 2-0 win for Leeds.