Match preview ahead of Leeds United's trip to the King Power Stadium to face Leicester on Sunday.

Following United's 2-1 win over League Two Chesterfield in the League Cup this week it is back to the Championship this weekend with a trip to face Nigel Pearson's Leicester City. Despite only winning on one of their last eight trips to face the Foxes, United came within a matter of seconds from taking all three points away last season, only to see Sam Byram's effort levelled by a last minute set-piece.

Rodolph Austin is set to make his first apperance of the season after completing his three match ban during the week against Chesterfield. El-Hadji Diouf could make an appearance on the bench after completing 75 minutes in a behind closed doors friendly. However, having missed the whole of pre-season with a shin injury, the Senegalese frontman may have to wait a little longer to make his first team comeback.

For the hosts, Zak Whitbread and Ben Marshall are available for selection after missing out during Leicester's 2-1 win over Wycombe in the Capital One Cup during the week. 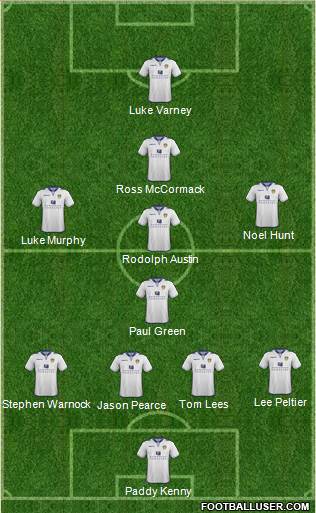 I think Luke Murphy will be forced wide in order to find a place in the team for Rodolph Austin. I think that will be the only change from the team that beat Brighton in the League last week. However Dom Poleon's goal in the win over Chesterfield could win him a place in the side ahead of Noel Hunt.

Leicester is always a tough away trip for United and it won't be any different this time out as Nigel Pearson's side look to win their first two League games for the first time since the 2002/03 season. A draw would be a great result for United who will hopefully be unbeaten as they travel back to West Yorkshire after this clash. I am backing them to do just that against a Leicester side who have only lost one of their last five opening home fixtures. A score draw.