It's time to call time on another season of frustration for Leeds United and their fans. Brian McDermott takes his side to Watford on Saturday lunchtime with the home side hoping to secure automatic promotion if they can beat United and better Hull's result against Cardiff. A win for Brian McDermott could see his side finish the season as high as tenth but defeat and the Whites could end up in 20th. United haven't won in the last four against Watford and the bookies don't give us a prayer of changing that this weekend with odds of 7/1 being given for a Leeds win.

United will be without El-Hadji Diouf and Rodolph Austin after the pair both saw red cards in last weekend's 2-1 defeat at home to Brighton. Player of the year Sam Byram, who suffered a hip injury during the warm-up of that game is also ruled out.

The promotion chasers have no new injury worries ahead of their crucial clash with Leeds. John Eustace and Fitz Hall have returned to fitness following injury and may take up a place on the bench. Nyron Nosworthy (Achilles), Neuton (Shoulder) and Tommie Hoban (Ankle) remain on the treatment table.

Watford have built a great team of foreign loanees this campaign and despite being heavily criticised, their system has worked and they are potentially one game away from a return to the Premier League. Someone that was already at the club though and has had a fantastic season is Troy Deeney. Deeney joined Watford for £250,000 from Walsall where the Birmingham born front man hit 27 goals in just over 100 starts and the 24 year old has continued his development at Vicarage Road where he is usually known for his hard work and endeavour. This year though, Deeney has added a healthy portion of goals to his game and has found the back of the net 19 times so far this season. Watford's number 9 will be looking to make that at least 20 as the Hornets look to Deeney to help fire them to the Premier League. 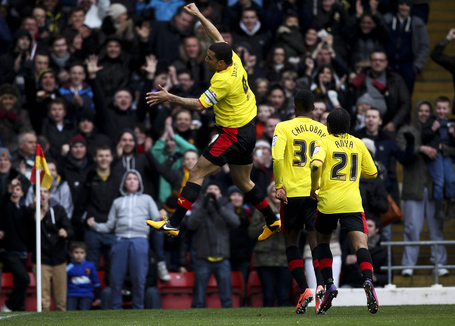 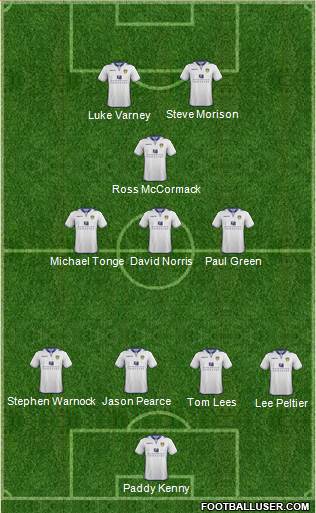 El-Hadji Diouf's stupid red card last card could see a recall for Steve Morison while David Norris could come back into the side in place of Rodolph Austin.

Well United will be aiming to spoil the party at Vicarage Road on Saturday but while everyone is hoping to end a disappointing season on a high, I think Watford will be too strong for United. I don't think we will see a repeat of the 6-1 scoreline we got at Elland Road against Watford this season but I would expect a Watford win. Gianfranco Zola's men need a favour from Cardiff who travel to Hull and if they get it and beat us, they are up. Hopefully it will be us looking to gain promotion this time next year.