Leeds United travelled to Molineaux to face a Wolves side who had failed to win since the 21st December and failed to win on home soil since the 8th of that month. Given that United hadn't recorded a victory away from home in the League since December 1st, it promised to be a terrible game of football.

The first half didn't disappoint. Neil Warnock handed debuts to his namesake Stephen and Steve Morison as the Whites looked to notch their fourth away win of the season. There were also recalls to the starting line-up for Paul Green and David Norris as Rodolph Austin, Ross Barkley, Aidan White and El-Hadji Diouf missed out. The Whites started the game in an unfamiliar fashion by having a shot. It was midfield man David Norris who's deflected shot landed on the roof of the net. It was evident that the home side were on a poor run of form as Leeds forced a number of early corners with chances for Ross McCormack and Paul Green both sailing wide. The Whites seem to be having a lot of trouble hitting the target of late and it was a trend that wasn't set to change throughout the afternoon. Ireland International Kevin Doyle demonstrated how to get a shot on target when a defensive mishap saw him have an opportunity on goal. Luckily for United his shot was straight at Paddy Kenny and the danger was averted.

Debutant Morison was the latest member Neil Warnock's side to fail to get his effort on target. However on this occasion, it was a decent effort as the Wales International nodded a McCormack free-kick marginally over. Dean Saunders' side looked a poor team but the longer the game went on, the harder it was to see any difference between the two club's as Wolves got more into the encounter. Wolves number ten Bakary Sako tested Paddy Kenny when his shot from just outside the box was tipped wide by the former QPR shot-stopper. That effort on goal almost got the home fans as excited as when Neil Warnock was having a go at the fourth official for an incident in which he thought his side should have had a free-kick. It was a rare show of emotion from United's gaffer who stood for most of proceedings with his hands in his pockets but it didn't impress the home support who were as vocal as they had been all game. Whilst Leeds had been more positive than they have been for a long time away from home, the scoreline of 0-0 seemed fair for what had been a game contested by two poor sides.

United hadn't gone out and attacked a poor vulnerable side who were there for the taking and just short of ten minutes into the second half it was 1-0 to Wolves. Some simple passing down the right hand side saw left back Stephen Ward get in behind Sam Byram who incidentally was having one of the poorest games of his short United career. A mistake last week against Cardiff seems to have destroyed the youngsters confidence. Ward's cutback was turned into his own net by captain Lee Peltier. United fans could have been forgiven for thinking that was game set and match given the club's away form this campaign. However the Whites did look as though they wanted to travel back to West Yorkshire with something as a good chance fell to David Norris. Once again though, the effort went sailing over the bar and the Whites still couldn't even test Carl Ikeme in the Wolves goal. Bakary Sako was once again frustrated by Paddy Kenny when his powerful effort was repelled by Neil Warnock's golden boy.

Leeds were only behind for ten minutes before the Varney Army were sent into raptures. Luke Varney picked himself up off the floor, where he was for most of the game attempting to win free-kicks, to curl in a beauty, notching his third goal for the club and second in three games. Some scrappy play resulted in Ross McCormack teeing up the former Portsmouth man to level the scores at Molineaux. Wolves could have been back in front not long afterwards when Christophe Berra saw his header cleared by Paul Green off the line. The game was there for the taking for both sides and it was Varney who was next to go close. United's goalscoring hero attempting to score from another curling effort, unfortunately this time Ikeme was equal to it and it was a corner for United.

A frustrating day for Wolves' Bakary Sako was about to get worse when he clearly fouled the advancing Sam Byram in the box. The linesman was quick to flag what was an obvious penalty (except to Dean Saunders it seems) and United had the chance to take the lead with just over ten minutes to play. Ross McCormack was the man to take responsibility for the spot kick and he slotted it home with ease. The Scotland International celebrating the goal with a Leeds salute which is sure to secure him a move to Norwich in the summer. Given Wolves' home form you couldn't see them getting back into the game in the closing stages. This is Leeds United though remember and despite making it all the way to stoppage time the game was to finish 2-2. There appeared to be a foul on Sam Byram but referee Roger East opted to award the home side with a foul. From the resulting series of events Wolves won a corner. Despite Paddy Kenny appearing to allow the ball to go out for a corner, believing it to be a goal kick, the officials decided it had come off a United man. The first corner was dealt with by Leeds at the expense of another corner. It was one corner too many for United to deal with and Danny Batth was allowed a free header from which it was easy for him to guide the ball past Paddy Kenny. 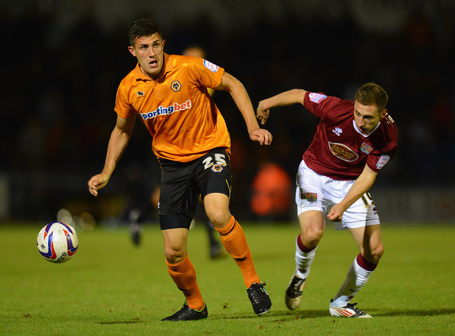 The Whites were a matter of seconds away from only their fourth away win of the campaign. First of all I'm not sure where the officials got four minutes of added time from. Not only were there no substitutions but there were no real stoppages throughout the game, especially in the second half. Secondly it definitely seemed to be free-kick to Leeds when Wolves were given the decision. I would have to see the whole Paddy Kenny incident again to see what really went on there. Having said all that, the fact of the matter is United didn't exactly deserve to win the game. We travelled to a team who haven't won at home for over two months and they haven't won at all since the 21st December and we didn't go all out to win the game. If my memory serves me correctly we had three shots on target. It might be 300% better than the shots on target managed at Barnsley but it still isn't good enough. Today was a lot better that what we have seen at Barnsley and Hull and many others but based on the events which occurred on the field today I don't think we can complain at a draw, in fact I think we should be happy with it. Middlesbrough away next, can we pretend they are in the Premier League? We will probably outclass them if we do that.