Kisnorbo Set For Chinese Move Away

Share All sharing options for: Kisnorbo Set For Chinese Move Away

United defender Patrick Kisnorbo, currently on loan at Ipswich Town, is expected to complete a surprising move to Liaoning Whowin in China.

The news is yet to become official but Calibre Sports Management, a company who represent various Australian players, broke the news on their Twitter account:

Kisnorbo was a firm fans favourite with Leeds United during his first season with the club. Unfortunately the 2010 player of the year and player's player of the year saw his United career ruined by injuries. Paddy was so good in his first season with the club that he won both awards despite seeing his season ended in March due to an Achilles injury. It was an injury that Paddy never really recovered from and he didn't come back the same player.

Kisnorbo will be remembered for his hard work and determination though and a particularly Terry Butcher like image following the win at Old Trafford in 2010 wearing his famous headband (below). Wherever Kisnorbo ends up, hopefully he can finish his career injury free, he deserves a bit of luck. 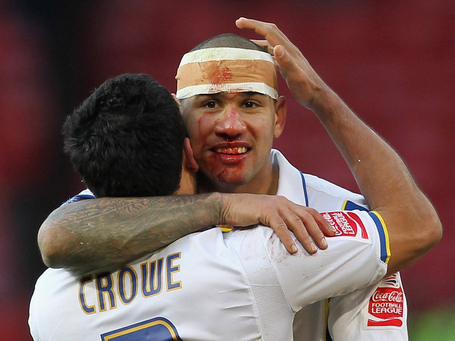