Match preview ahead of Leeds United's game with Wigan Athletic at Elland Road this Wednesday.

Leeds United entertain manager-less Wigan Athletic this Wednesday night. Owen Coyle offered his resignation at the DW stadium following three home defeats in a row and the Latics now travel to Yorkshire for their first clash with United in almost eight years with no manager. The last time the two sides met, a screamer from Gary Kelly wasn't enough to see the Whites through to the next round of the F.A Cup as the Whites lost out on penalties following a 3-3 draw.

Leeds ended a three game winning streak with defeat in front of nearly 7,000 travelling fans at Ewood Park and Brian McDermott will be looking for a reaction here. Wigan are in desperate need of a win themselves and the Europa League participants will be hoping they can stop the rot at Elland Road. Should United take all three points, it will be only their second ever success against Wigan in their sixth clash and their first in League competition.

Team News:
Dexter Blackstock missed the trip to Blackburn with a swollen knee and the striker will also miss the visit of Wigan. Brian McDermott had the following to say on the injury:

"Dexter Blackstock is not available for Wednesday so we will have to see how he is for Saturday.
He is going to see a specialist and we'll see where he goes from there.
He has gone back to Forest to see their guy. He'll be having a scan and then we will see how he is. I can't put a timescale on it.
It would be disrespectful to anybody who replaced Dexter in the side to say that we missed his presence, but Dexter has done well for us.
We certainly could have got the result on Saturday and we probably should have done. If we'd have scored the first goal it would have been a totally different game. But that's life and that's football, you have to bounce back from a defeat."

Fellow striker Ross McCormack is also struggling with a hip problem which could mean Luke Varney keeps his place up front despite a below par performance at Ewood Park at the weekend.
Scott Wootton's ankle injury will keep him sidelined for another game while Tom Lees will be assessed after he picked up a knock to his knee at the weekend.
The likes of Sam Byram and Stephen Warnock will be hoping for recalls following United first defeat in four last time out.
For the visitors, former United keeper Scott Carson is likely to be recalled to the side after recovering from an ankle injury. Gary Caldwell and Shaun Maloney will be out with hip injuries but Ivan Ramis could be recalled to the starting line-up.
My Predicted United Line-up: 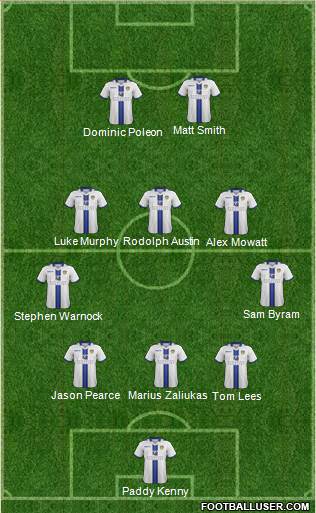 With another game coming up on Saturday, I think McCormack's knock will keep him out of this game. Blackstock's injury means that McDermott has a decision to make on who to play up front. I would go with Smith but I wouldn't be happy to partner him with Varney. His performance at the weekend means he doesn't deserve to keep his place in the team anyway in my opinion, so I have opted for Poleon.

I think Lees will be passed fit to keep his place in the team whilst I think Warnock and Byram will be back in at the expense of Pugh and Peltier. What is McDermott thinking though?