Match preview ahead of Leeds United's game with Middlesbrough at Elland Road.

Another pointless International break is over and it is time for proper football to return. Leeds United face a Middlesbrough side led by manager Aitor Karanka for the first time as they look for their third win in a row. Last time out United were victorious against Charlton Athletic thanks to four goals from Ross McCormack and Brian McDermott will be hoping his main man can find the net again against the club who were desperate for his services during the summer.
Team News:
Marius Zaliukas is expected to make his first start for United in place of the injured Scott Wootton. Ross McCormack withdrew from the Scotland squad during the week because of a hamstring injury but is due to be fit to face Boro.
Stephen Warnock, Alex Mowatt and Sam Byram are all available for selection after missing recent fixtures, however Michael Brown and Danny Pugh are hoping to remain in the side following solid performances during the Whites' 4-2 win at Charlton.
Former United favourite Jonathan Woodgate is expected to start after recovering from a groin injury. However fellow defender Seb Hines will be given a late fitness test on his hamstring injury.
My Predicted United Line-up: 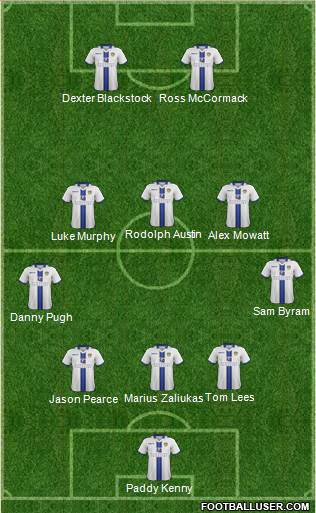 I think Sam Byram will be recalled in place of Lee Peltier and I think Alex Mowatt will return to the team at Michael Brown's expense. I would keep Danny Pugh in the team ahead of Stephen Warnock because his performance against Charlton merits that. Zaliukas will replace the injured Wootton at centre back.