Match preview ahead of Leeds United's trip to their Yorkshire neighbours Huddersfield Town.

It's cup final time in Huddersfield as United make the short trip to the John Smith's Stadium. The Whites put in their best performance for some time last time out against Birmingham City at Elland Road, coming out 4-0 winners and it could have been more. It was a much needed result after a string of poor performances and bad results. 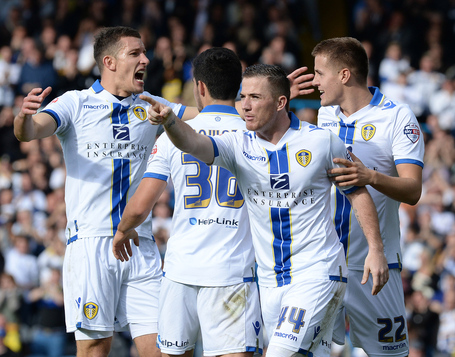 Despite beating Huddersfield 4-2 in this fixture last campaign in what was arguably Leeds' best performance in the League all season, United haven't enjoyed much recent success in this clash with only one win in the last seven games. Leeds are looking to build up some momentum now though and will go into this clash with their confidence boosted following the Birmingham result.

There are no fresh injury concerns ahead of the trip to Huddersfield but manager Brian McDermott insists competition for places is high.

"It's been a really good week. On the back of a good result, we've strengthened the squad. Dexter has a lot of experience, he's a good age, and there were others in for him. Brighton and Sheffield Wednesday were interested, so there was competition, but I met him on Tuesday, had a good chat, and he's a good lad.

He worked with the lads on Thursday, and comes in on the back of a good performance. I don't like 30-day loans. That can be detrimental. This is until January, and there's obviously a situation where we can look at it at further down the line.

There is a battle for places and you have to make it competitive. We've been working hard this week."

With Brian McDermott likely to go with the same side that demolished Birmingham last week, new signing Dexter Blackstock may have to make do with a place on the bench. El-Hadji Diouf returns to the squad after returning from Senegal where he has been on compassionate leave.

The hosts will be without star striker James Vaughan who will sit this one out through suspension following on from his red card last week.

Anton Robinson (knee) is also on the sidelines after he picked up a serious injury at the end of last season.

It would have been Town top scorer James Vaughan but because of his suspension I have opted for United old boy Adam Clayton. Many Leeds fans were shocked when Neil Warnock opted to transfer list and sell Clayton to Huddersfield in July 2012 and the former Man City man has gone on to become a key part of the side at the John Smith's stadium. Having caused a few problems for the Whites in this fixtures last season, problems which included scoring a penalty and celebrating rather petulantly in front of the Leeds fans and management, United should try to keep his involvement down to a minimum. 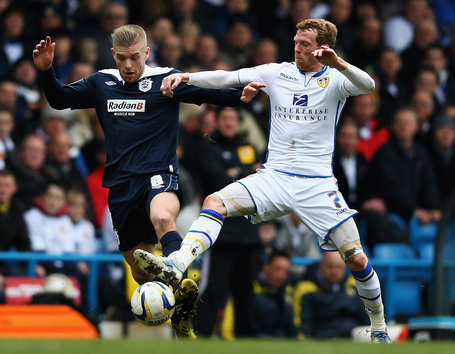 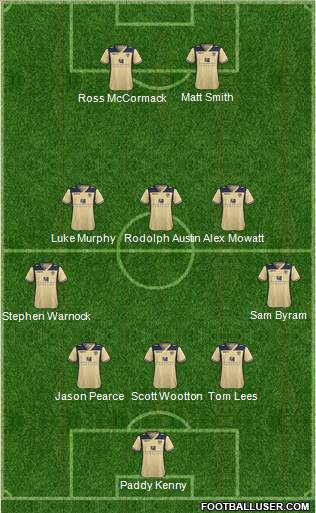 Despite having my doubts as to whether this formation can be as effective away from home as it was against Birmingham, McDermott will stick with the formation, with the same personnel and rightly so. Dexter Blackstock should be on the bench after the performance of Matt Smith last weekend when the big man was unlucky not to finish with a hat-trick.

If we don't build on last weeks performance then it means very little. Hopefully Brian McDermott will leave the shackles off and allow his team to go for it again. If we take the game to Huddersfield, as we did on this ground last season, I see no reason why United can't take away all three points again. Let's stay positive and go for it, come on Leeds.