Deadline Day: Morison In, Becchio Out

Striker Steve Morison has joined the club in a deal that sees Luciano Becchio go the other way.

Share All sharing options for: Deadline Day: Morison In, Becchio Out

Leeds United have made their first and perhaps only signing of transfer deadline day in the shape of Steve Morison from Norwich City. The former Millwall man has put pen to paper on a three and a half year deal with the club.

The deal, which also involves the Whites receiving an undisclosed fee, sees Luciano Becchio go the other way. The Argentine forward will now join Robert Snodgrass, Jonny Howson and Bradley Johnson in the former Leeds United club at Carrow Road. 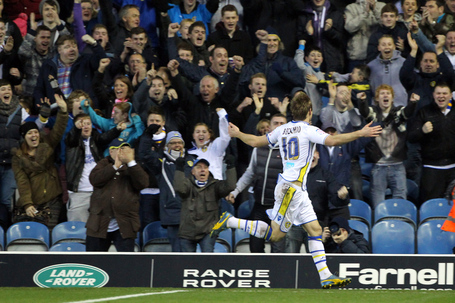 For the first time in a long time though the club have signed a more than capable replacement in my opinion. Steve Morison notched 40 times in 95 appearances for Millwall. It was form like that which caught the eye of some Premier League clubs, including Norwich City who splashed out £2.8 million on the Wales International.

Neil Warnock had the following to say to the club's official website:

"Even before Luciano put in his transfer request we had enquired about Steve - he was at the top of my list in January to bring in - and I can't tell you how delighted I am.

Steve meets all the requirements of the striker we've been looking to bring in. For me, he is a player who has everything. He can score goals from anywhere - whether it's 25 yards or a tap-in - he has pace, and he has all the attributes you want."

It's sad to see Luciano Becchio leave the club, he scored some very good and important goals for us however if Morison can recapture the form he had at Millwall then we've got a fantastic replacement on our hands.