How did you rate the players performances during Leeds United's 2-1 win over Tottenham Hotspur at Elland Road?

A superb team performance from United as they deservedly beat Premier League Tottenham Hotspur 2-1. Peltier, Varney and McCormack were top dogs today for me, what did you think?

Jamie Ashdown - 6 - Had little to do but did what was required of him.

Sam Byram - 8 - Another top performance from Byram as his reputation continues to grow. Dealt with Bale well.

Lee Peltier - 9 - Easily Peltier's best performance in a Leeds shirt. Made a terrific last ditch tackle at the end of the game.

Tom Lees - 7 - Looked shaky in parts but played his part in a solid defence.

Aidan White - 8 - Had a good game and got stuck in. Dealt with Spurs' other flying winger, Aaron Lennon admirably.

Rodolph Austin - 6 - A better performance from Austin than we've seen in recent weeks but still not top notch.

Michael Brown - 8 - Captain for the day and put in another sterling cup performance. Pestered Scott Parker all afternoon.

Luke Varney - 9 - As with Peltier, Varney's best performance in a Leeds shirt, took his goal well. 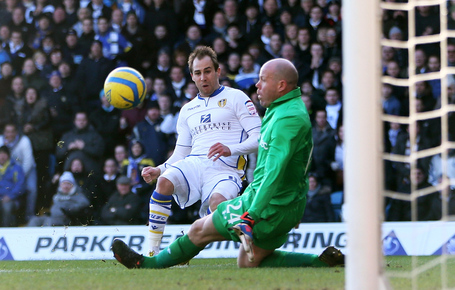 El-Hadji Diouf - 7 - Linked up well with McCormack and helped to make things happen for United.

Ross McCormack - 9 - On another day could have had a hat-trick but took his goal fantastically. Top Drawer finish.