Match preview ahead of Leeds United's trip to Bristol City.

Leeds United make the long trip to Bristol City this weekend as they aim for their third win inside a week. United will travel to Ashton Gate full of confidence on the back of wins against Nottingham Forest and Everton, one of the most in-form teams in the country. It doesn't get any easier for Leeds though as Bristol City have started the season in good form and teams such as Cardiff City have already left Ashton Gate empty handed this campaign. Leeds have done the double over City during the last two campaigns though and will be hopeful of returning to West Yorkshire with all three points.

Jamie Ashdown is likely to get his first league start for Leeds United as Paddy Kenny continues to struggle with a groin strain. Skipper Lee Peltier also missed the cup win over Everton in midweek and Sam Byram may continue to deputise at right back.

Jason Pearce and Tom Lees both took blows to the head against Everton but both should be fit to take on Bristol City. Meanwhile Luciano Becchio continues to play despite a slight ankle injury and should once again lead United's line.

Sam Baldock has got his Bristol City career off to a flying start, smashing 4 goals in five appearances so far. The 23 year old joined City from West Ham towards the end of the transfer window, signing a three year contract for an undisclosed fee and he is quickly becoming a fans favourite at Ashton Gate. Baldock came through the ranks at Wimbledon FC and stayed at the club as they became Mk Dons and after breaking into the first team set up, he struck 43 goals in 124 appearances. Baldock then moved to West Ham United where he found first team chances hard to come by but still managed to find the back of the net 5 times in the Hammers promotion winning season. Bristol City's number seven will be hoping to continue his fine start to the campaign when Leeds come to town. 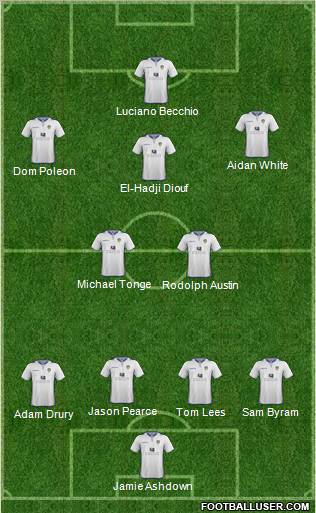 Neil Warnock has some decisions to make about Saturday's line-up. I have only predicted two changes from the team that took on Everton and they are Adam Drury, who was rested against Everton to come back in at left-back and Dom Poleon to come back into the side in place of Michael Brown. Warnock's three man midfield of Tonge, Brown and Austin was very effective against Everton and the Leeds gaffer may opt to keep Brown in the side and play the same system. Whichever line-up he goes with I'm sure it will be a close call.

It's going be yet another tough game for Neil Warnock and his team but after victories against two good teams in Nottingham Forest and Everton, I don't see any reason why we can't go there and pick up three points. I admit that after the Hull game I was feeling very negative but the last two games have reminded me exactly what a team led by Neil Warnock is capable of and I personally have renewed optimism that we can have a successful campaign. Come on Leeds.