Share All sharing options for: Looking Back: LUFC v Oxford in the 80's & 90's

Way back I ancient history (Christmas 1985) I received what at the time seemed like a strange gift, albeit as a ‘stocking-filler’. It was a hardback book called the ‘Rags to Riches – The Rise and Rise of Oxford United’, a book that chronicled (mainly) the period between 1981 and 1985 where a quite extraordinary turn of events took place.

Why I received that particular book has never been explained, given the fact that my parents knew I was in the courtship of my love affair with Leeds United at the time, so naturally puzzled but at an inquisitive age, I read the book anyway. What I read, was indeed a meteoric rise.

Back in 1982 the club were facing obliteration and closure until the late media tycoon Robert Maxwell took over, almost forcing the club to a possible future as Thames Valley Royals (a merger with Reading). Under understandable protestations by supporters of both clubs Maxwell threatened to fold the club if the merger did not go through, a threat that was thankfully not carried out and enabled Oxford to win the 3rd Division title in 1983-84 (now known as League One). This promotion brought Oxford into the second tier of the English league for the first time in eight years and would put them up against amongst others Leeds United, a foe they had already vanquished 4-1 in a League Cup 3rd Round replay in their 3rd Division Championship season.

Under the stewardship of the ‘bald eagle’ Jim Smith, Oxford had another excellent season, also chronicled in Rags to Riches as back-to-back championships were achieved. Leeds found themselves in the midst of a second-half collapse in the fixture down at the Manor Ground. Managed by Eddie Gray and led by veteran Peter Lorimer on a terrible pitch and despite taking a two goal lead, Leeds were eventually thrashed 5-2 by a team that contained future Liverpool superstar John Aldridge.

The return fixture in April 85’ was a different story. By late April Oxford were already promoted to the top tier and were champions elect when they arrived at Elland Road, only to be sent home bruised after a 1-0 defeat. A determined Leeds side conjured a win that kept alive their slim hopes of promotion (back then the top three were promoted, no play-offs)hopes that would be eventually extinguished three games later amidst terrible scenes at Birmingham.

Oxford’s upward mobility continued into the next season as they avoided an immediate drop back into Division Two and secured their first major trophy with a win in the League Cup final against Queens Park Rangers. However, Oxford’s stay in the top tier was short-lived and they were finally relegated in 1988. Leeds had two home fixtures against Oxford before our own promotion in 1990 (a 1-1 draw, 2-1 win) which brought about an end the two clubs league meetings.

Only three cup fixtures have occurred in the 22 years since the last league meeting between the two clubs. In January 1994 Oxford took a 2-0 lead in a Fourth Round FA Cup tie at the Manor Ground, only to allow Leeds back in the game with goals from Gary Speed and David Wetherall. The replay at Elland Road followed the same pattern, again Oxford took a two goal lead before Leeds scored two late goals by Gordon Strachan and then at the death through the recently acquired David White. In extra time Oxford weathered an early storm to complete a night of giant-killing through a well-taken goal by Jim Magilton. Howard Wilkinson was understandably furious at the post match press conference, describing his side’s defending as ‘suicidal’ and Oxford’s opening goal as a ‘joke’. His front pairing of Brian Deane & Frank Strandli took the full brunt of his criticism, ‘they gave us nothing’ he said bluntly. 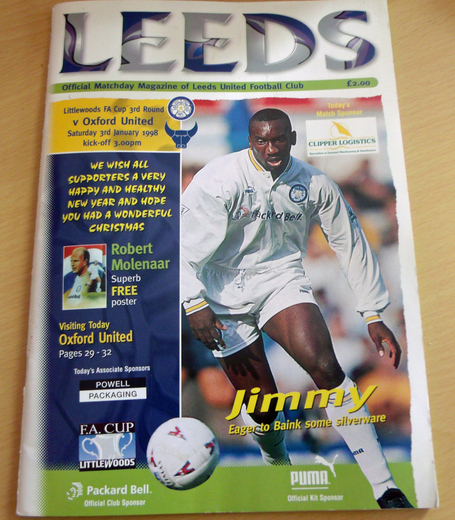 The last fixture between the clubs occurred on the 3rd January 1998 in the third round of the FA Cup. Oxford by now were about to suffer a massive decline in fortunes. Three days after their previous match at Elland Road in February 1994 they went to the bottom of the First Division (now Championship), a position they would never recover from resulting in their relegation in May 1994. Having fought their way back to the 1st Division they yet again faced Leeds in a Third Round FA Cup tie on a freezing cold day in January 1998.

In the fifty page programme (at a reasonable price of £2) our then manager George Graham bemoaned previous giant-killings and players being taken away from the club for pointless international friendlies. Overall however, he was happy about the progress the club was making (they were 5th in the Premiership at the time) although it was progress he wouldn’t stick around to complete. The programme also featured an unhelpful piece on the 1994 cup-tie but as the match transpired, there was to be no repeat giant-killing from Oxford.

The match, despite having goalkeeper Nigel Martyn sent off was a breeze for Leeds. A rare goal from ‘The Chief’ Lucas Radebe, a penalty from Hasselbaink and two second-half goals from Harry Kewell gave the score-line a healthy look against ten-man Oxford on a bitterly cold afternoon. Leeds eventually reached the Quarter Finals of the competition before being beaten at home by First Division Wolves.

Overall Leeds’ record against Oxford is Played 11 Won 4 Drawn 3 Lost 4 with 44 goals being scored with an even split of 22 each.

Here’s hoping for another high-scoring game, and hopefully like Oxford’s last visit to Elland Road, all one-way traffic!