Leeds United get back to business this weekend as they host Shrewsbury Town in the League Cup for what is their first competitive game of the new season. This summer seems to have flown by with the European Championships in Poland and Ukraine as well as the Olympics in London keeping football fans all around the world entertained while the domestic season has been on its summer break. It is has been a busy summer as ever at Elland Road and despite uncertainty over the ownership of the club lasting all summer, manager Neil Warnock has brought in ten new players to his new look squad.

Neil Warnock could hand up to ten players their debuts for Leeds United on Saturday. The manager has reported no new injury concerns so Jason Pearce, Paddy Kenny, Adam Drury, Paul Green, David Norris, Luke Varney, Rodolph Austin and Lee Peltier could all be handed their first starts. However, new signings Andy Gray and Jamie Ashdown will probably have to make do with a place on the bench.

Davide Somma and Leigh Bromby are the only two squad members not to play a part in pre-season but despite Patrick Kisnorbo taking part in the last two games, it is likely to be a number of weeks before the Australian gets close to first team action.

The visitors have two injury doubts for their trip to Elland Road. Reuben Hazel and Darren Jones both have calf problems and will be assessed ahead of kick off.

Promising young defender Jermaine Grandison is my first one to watch of the new season. Grandison made 47 appearances during Shrewsbury's successful promotion campaign from League Two last season and quickly became a fans favourite following his switch from Coventry City. Grandison, a powerful defender, can play at right back or at the heart of the defence and isn't afraid of supporting his team mates in advanced positions. The Birmingham born defender scored two vital goals last term which both proved to be match winners and the Whites will have to watch out for his strong, powerful forward runs. 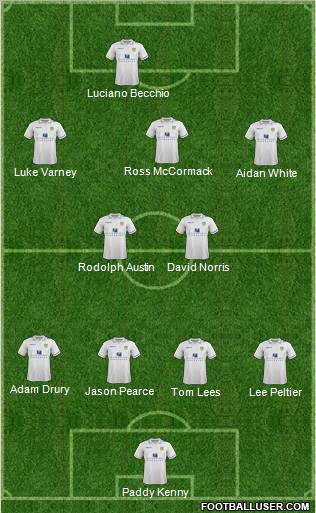 Neil Warnock has said all along that he will be going with a strong side for the visit of Shrewsbury Town and I think this is what he will go for. I wasn't sure who to choose from out of Paul Green and David Norris, I went with Norris in the end but it could be that they both play. Aidan White played left back while Paul Green played on the right side of midfield on Tuesday night at Burton and Adam Drury sat on the bench but I think he will be in United's back five for their first competitive fixture for the 2012/13 campaign.

Whilst this isn't a league fixture, Warnock will still be eager to get the campaign off to a positive start. A much better start is needed that the first competitive game last season when United lost out 3-1 away to eventual promotion winners Southampton. It was a poor start to the season and a game which saw United's back five consist of Andy Lonergan, Paul Connolly, Andy O'Brien, Patrick Kisnorbo and Darren O'Dea...it was bad wasn't it? We are looking much stronger at the back now and not only is the defence all changed but the only survivor of last years midfield will be Aidan White if my predicted United line-up is correct. It's been all change at Leeds United this summer and hopefully there will be a different feel to Elland Road when the game kicks off tomorrow. Hopefully we will also get the season started with a comfortable win, it won't be easy against a Shrewsbury side still fresh from promotion from League Two. Not only did Shrewsbury get promoted but they also knocked Derby County and Swansea City out of the League Cup and United need to be on their guard but I think the boys can do it as they look to gel as a squad.