Leeds United prepare for their second game in four days when they host Derby County at Elland Road on Monday. Warnock's men are staring their third defeat in a row and Derby, who are level on points with the Whites, will be looking to leapfrog Leeds in the table when they visit West Yorkshire on Easter Monday.

Derby have come out on top of the last six meetings between the two sides and will complete the double over the Whites this campaign should they make that seven. A win would be Derby's fifth win in nine outings whereas United have lost three of the last four and have only managed to win sixteen games all year so far.

Darren O'Dea and Paul Connolly are both available for selection again following their suspensions. However Adam Clayton sits out the second of his two game suspension while Zac Thompson has joined the list of suspended players after he received a straight red card away at Reading on Good Friday. Whilst Neil Warnock has no new injury worries, Aidan White, who is expected to miss the rest of the season, remains on the sidelines.

Derby are expected to welcome back Steven Davies who missed the Rams' last game with a bug. Meanwhile, Jamie Ward who returned to the side for the game with Ipswich after six weeks out of the side with a thigh injury, is it expected to drop back down the bench for the trip to Leeds.

Derby striker Theo Robinson has hit nine goals so far this term and is currently the club's leading goalscorer. Following a successful spell at Huddersfield where Robinson hit 16 goals during the 2009-10 season, the pacey front man was snapped up by Millwall where it didn't quite work out for the front man. The lions loss was Derby's gain though and following a productive loan spell at Pride Park, Robinson was signed on a permanent basis in the summer of 2011.

Robinson began his career at Watford before having a loan spell at non-league Wealdstone, the club where Leeds United signed Jermaine Beckford from. Robinson also had loan spells at Hereford and Southend before arriving at Huddersfield in 2009. Derby's number 21 will be looking to take his tally for the season to double figures when the Rams visit Elland Road. 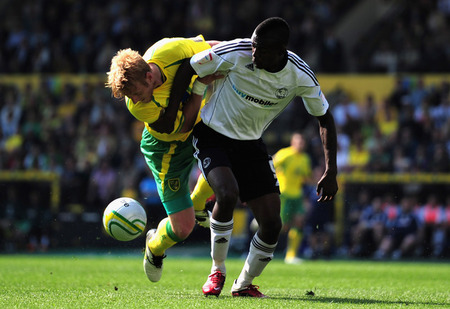 I think it's going to be another tough home game for Leeds as Neil Warnock continues to look for his first home win as United manager. It would be nice to see a good performance for a change at Elland Road, the play-off dream is over and I think we just need to finish as high as we can as Warnock continues to make his preparations for next season. I'm going to go for a narrow home win, at long last.