Luciano Becchio's 11th goal of the season in the 73rd minute was enough to earn Leeds a point, after they fought back to delay Cardiff's confirmation in the play-offs.

Cardiff boss Malky Mackay named an unchanged side from the one that dispatched of Derby County on Tuesday night. On the other hand Warnock made three changes with some of them forced. Alex Bruce came into the defence in place of Darren O'Dea, Danny Webber dropped to the bench for Zac Thompson and Luciano Becchio replaced the injured Billy Paynter.

Ross McCormack went close with a header for Leeds while Liam Lawrence tested Andy Lonergan early on. In the 32nd minute Leigh Bromby was stretchered off in what looked like a nasty injury (Alex Bruce struggling to look at Bromby's leg). Paul Connolly then replaced the former Sheffield United defender. 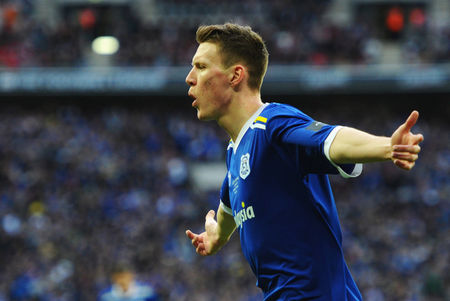 Cardiff capitalised on some more poor Leeds defending when Joe Mason got on the end of Whittingham's long ball before lobbing the out of position Andy Lonergan.

All in all an improved result to what many were thinking. Tomorrow Jen will have a far more detailed report plus they'll be the player ratings.

One week today and all the stress will be over woohoo!