Leeds welcome Nottingam Forest for a midweek clash at Elland Road as the Whites look to make some ground on the top six. Leeds will be aiming to score four past Forest for the third time in a row after recording 4-1 and 4-0 wins in the last two meetings and the visitors haven't beaten United since 1996 when they were victorious at Elland Road. Nevertheless Nottingham Forest could make it 28 victories each in this fixture on Tuesday night, after 84 encounters, Leeds have won 28, Forest 27 and 29 have ended in a draw.

United have only lost one of their last six games, however three of those games have been draws and goals have so far been hard to come by under Neil Warnock who has only seen his side hit the back of the net three times in five games. Forest travel to Leeds having achieved three wins from their last six games which have propelled Steve Cotterill's side to two places above the relegation zone. Leeds though, will be vying to become the sixth club to do the double over Forest this season but will have to keep only their third home clean sheet of the season to give themselves the best chance of doing just that.

Alex Bruce and Leigh Bromby continue to get closer to a return to action but are likely to remain on the sidelines for the visit of Nottingham Forest. Warnock has no new injury or suspension worries so could once again named an unchanged side as he looks to edge the Whites closer to the play offs.

For the visitors George Elokobi and Danny Higginbotham are both expected to return after the pair have been out with hamstring injuries. However, the visitors will be without Marcus Tudgay who is suspended following a red card at Pride Park last time out.

Andy Reid returned to the club where he started his career at the beginning of the season and the midfielder, capped 27 times by Ireland will be looking to make up for the red card he received in the reverse fixture by helping Forest to all three points at Elland Road. since originally leaving Forest in 2005, Reid has enjoyed spells at Tottenham, Sunderland, Charlton, Blackpool and Sheffield United amassing over £10 million in transfer fees. In his first spell at Forest, Reid notched 25 goals in 160 appearances and Tottenham saw enough potential in the Irishman to splash out £8 Million in a deal which also saw Michael Dawson move to the London club. Reid certainly possesses a lot of talent and the 29-year old has been one of the shining lights for a struggling Forest side this campaign. 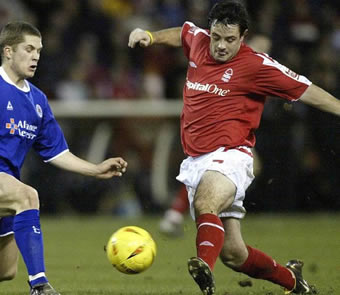 Reid is enjoying his second spell at the club.

Leeds need a win in this fixture to keep any sort of hope alive about making the end of season play offs and I think we'll get it. United have been unlucky not to record a win at home lately and despite a draw being a fair result on Saturday, the late equaliser was very deflating. West Ham made the game very scrappy and hopefully Forest won't do the same and Leeds will get the better of them. I think we will run out comfortable 3-0 winners.