Leeds United set off for Huddersfield, a destination that hasn't delivered any success whatsoever in recent years, on the lookout for 3 wins in a row having defeated both Crystal Palace and Leicester City in the last week at Elland Road. Neil Warnock could have named an unchanged side for the third game in a row but opted to replace El-Hadji Diouf with Ross McCormack in the starting line-up. Diouf reportedly had a tight hamstring ahead of the clash so had to make do with a place on the bench next to Jason Pearce who returned to the squad following a three game suspension.

Leeds fans could be forgiven for thinking the same old story was going to occur at Huddersfield when on 12 minutes their side were behind. Chris Atkinson found himself in behind the Whites defence and he placed a neat finish past Paddy Kenny in the United goal sending the home fans into ecstasy. If United weren't aware of how important they were to the hosts with the constant chanting of 'we all hate Leeds scum' then they certainly were when the goal went in. It seemed like Christmas had come 24 days early at the John Smith's Stadium with Simon Grayson even showing his delight with a number of fist pumps. Leeds hadn't actually started the game all that badly but some slack defending had seen them fall behind early on. Paul Green and Sam Byram were working well together as United tried to get back into the game but no real clear cut chances were created as the home side were not being truly tested.

The game was just about to burst into life though as ten minutes before the interval United were level. The ball was cleverly teed up for Michael Tonge on the edge of the area but his tame shot appeared to have wasted a good chance for the visitors. However somehow Alex Smithies managed to allow the ball to go under his body and Leeds had equalised. The stewards and the police barely had time to kick out the Leeds fans who had celebrated their teams goal in the home end before Luciano Becchio had made it 2-1 to Neil Warnock's side. Michael Tonge sent a delicious past over the top to send Ross McCormack through. The returning Scotland International kept a level head as he cut back inside and squared it to Becchio who delightfully sent the ball past Smithies for a terrific second United goal. 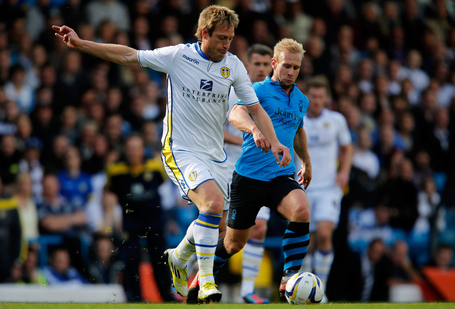 With not long to go before the interval, Leeds could have done with holding on until half-time but it wasn't to be. A dubious free-kick was awarded by the linesman down United's left hand side and from the delivery Luciano Becchio was adjudged to have fouled the Huddersfield attacker and Mike Dean pointed to the spot. Adam Clayton stepped up and slotted the ball home before running up the touchline to make a fool out of himself. By sliding on his knees in front of Neil Warnock, Clayton clearly feels he is a bigger deal than he actually is. It was frustrating for United to go into the break on level terms after quickly taking the lead but nevertheless 2-2 was the score at the interval.

It was certainly an open game and after Alan Lee had sent a header over the bar, United went straight up the other end and Thomas also put his effort over the top. Thomas, making his third start in a Leeds shirt, probably should have done better with the chance. The Whites were starting to get on top of proceedings and the next person and another good chance was created, this time for Ross McCormack. Smithies wasn't feeling as generous this time though as he held onto McCormack's effort from just outside the area. You got the feeling that the game certainly wasn't going to end 2-2 and despite United being on top, they needed to take one of the chances they were carving out. Thomas, guilty of missing a couple of the visitors chances was replaced by Ryan Hall and it was the on-loan Southend man who provided the assist as Leeds took the lead for the second time. Hall passed the ball to David Norris inside Huddersfield's penalty area and the former Portsmouth man controlled the ball before guiding past Smithies and into the net, 3-2 to Leeds.

There was twenty minutes still on the clock and you would have expected United to be holding on for much of that time. That was not the case as Town failed to come at Leeds at all. Ryan Hall almost managed to get himself on the scoresheet after some nice skill from McCormack gave him the opportunity to provide a teasing cross. Hall managed to get his head on the ball but for once during the game the Huddersfield goalkeeper was equal to the effort and managed to tip the ball over for a corner. Smithies was to beaten by a header though and it came from the head of Luciano Becchio who met Hall's cross with enough venom to put the ball past the keeper. It was game over for Simon Grayson and Huddersfield Town who's fans will have to wait for another year to be victorious on cup final day. It cannot be denied that United deserved the win, especially in the second half their attacking football was a joy to watch and in fact, the Whites probably deserved another goal or two. Your petulant celebration looks kind of pathetic now doesn't it, Clayton?

Three wins in a week have helped United climb the table and long may it continue, next up is Derby County away next Saturday.