Brighton 2-2 Leeds United: United Escape From The Amex With A Point

A summary of all the key moments during Leeds United's 2-2 draw away at Brighton on Friday night.

Share All sharing options for: Brighton 2-2 Leeds United: United Escape From The Amex With A Point

Leeds United traveled to the Amex Stadium on Friday night to play Brighton. Both sides needed a win in the league but the game followed the trend of many of United's recent League games and it was Brighton who took the initiative. The home side took the game to Leeds in the opening stages but it was only from the penalty spot that Brighton managed to take the lead. With 16 minutes on the clock Lee Peltier brought down Will Buckley, even though the Brighton man was moving away from goal. There were no complaints from the Leeds skipper as Craig Mackail-Smith smashed the spot kick passed Paddy Kenny.

Brighton continued to dominate proceedings but the Whites were offered a route back into the game when shortly after the half-hour mark, Luke Varney, keeping his place in the team ahead of top-scorer Luciano Becchio, was brought down by Bruno in the area. With United's penalty taker sitting on the bench, El-Hadji Diouf took responsibility for getting United back in the game. The former Senegal International didn't disappoint as he dispatched his penalty well and United were back on level terms. Tom Lees had to be replaced before half-time after seemingly taking a whack to the eye.

United had no time to settle in the second half as just two minutes in that man who always scores against Leeds got his second of the game. Some good build up play saw Will Buckley cut the ball back to Craig Mackail-Smith who gleefully steered the ball past Paddy Kenny via a deflection. Brighton could and probably should have made their dominance of the game show on the score sheet but they couldn't do so and with just less than 25 minutes left on the clock Leeds were back level. It was Michael Brown who sent a curling shot past Kuszczak in the Brighton goal. However replays suggest that the final touch came off Luciano Becchio who had come on to the field in place of Luke Varney. The Argentine should have scored moments later when Aidan White sent in a cross but Becchio could only guide his header wide of the goal. 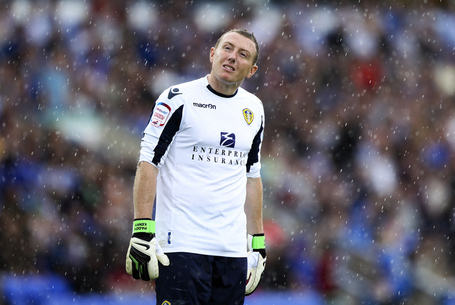 Leeds have Paddy Kenny to thank for earning them a point after two crucial saves towards the end of the game. The home side were handed their second penalty of the day when Sam Byram brought down Mackail-Smith in the area. It was once again a needless penalty as the ball was clearing the danger zone but the youngster handed Mackail-Smith the chance to get his hat-trick against the team he loves to score against. It wasn't to be this time though for the former Peterborough man as Paddy Kenny was equal to his penalty, diving to his right to catch the ball. Kenny also had the final say on the match when Brighton worked their way into United's area, Andrew Crofts had a great chance to score but his effort was brilliantly stopped by Paddy Kenny who ensured the Whites returned to West Yorkshire with a point.