Match preview ahead of Leeds United's trip to Bolton Wanderers.

Leeds United are once again on their travels this week as games continue to come thick and fast. It has been a great week for the Whites who have backed up some good news regarding the takeover off the field with 3 wins in a row on it for the first time since December 2010. United have put Nottingham Forest and Bristol City to the sword in the league as well as dumping Premier League Everton out of the cup. It doesn't get any easier for United though as they prepare for the trip to recently relegated Bolton Wanderers. The Trotters haven't had the best start to life in the Championship and the pressure is starting to mount on manager Owen Coyle as his side sit 18th in the league. The game will be the first meeting between the two sides since Sam Allardyce's Bolton side ensured Leeds United were relegated from the Premier League in 2004. Neil Warnock will be hoping to avenge that horrible day in United's history and pile on the misery for Owen Coyle when his side arrive at the Reebok Stadium on Tuesday night.

Neil Warnock named a side against Bristol City which included both Paddy Kenny and Lee Peltier. Both players were expected to miss the clash but declared themselves fit for the game. David Norris also managed to make the bench after missing several games through injury.

"I don't think Paddy was 100 per cent fit, you could see that, but he said he wanted to play so we'll see where we are with him.

Pelts was another who wanted to play, and he did well. He really stood up to the challenge.

David Norris also said he was fit which was obviously a big bonus so we put him on the bench.

We'll see where we are with everyone on Tuesday before making any decisions."

There are no new injury worries ahead of the clash with Bolton but Paul Green and Ross McCormack remain in the treatment room.

Bolton will welcome back Benik Afobe, the on loan Arsenal man missed the defeat to Crystal Palace at the weekend but returns to the fold to face Leeds. The game comes too soon for Marcos Alonso though who hasn't recovered from the knock he picked up in Bolton's 2-1 win over Sheffield Wednesday.

Other players on the injury list include David Wheater, Stuart Holden and Josh Vela.

Kevin Davies has been around a long time and his career has included spells at Chesterfield, Southampton, Blackburn Rovers and Bolton Wanderers. Despite Davies' advancing years, the 35 year old has scored two Championship goals this season and with United's inability to deal with big, powerful strikers in recent years, I think he is the one United need to look out for. The Whites have a much better defence than the days which saw Jon Parkin hit a hat-trick at Elland Road but Leeds are still leaking goals and Davies and co will be looking to exploit that. At the tender age of 33, Davies was given his England debut and after relegation from the Premier League, the Bolton skipper will be hoping to lead his side back to the Premier League before his career comes to an end. 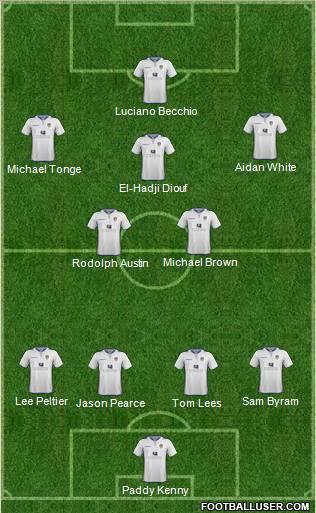 Personally, I think Neil Warnock will name an unchanged side for the trip to Bolton Wanderers. Warnock is good at keeping his cards close to his chest though regarding team selection and someone who wasn't involved at the weekend was Adam Drury. The former Norwich defender may be involved but it would be harsh of Warnock to drop either Aidan White or Sam Byram after very good performances in the last couple of games.

Bolton will be looking to get back on track after they let Crystal Palace leave the Reebok with all three points on Saturday. Neil Warnock won't care about that though and I'm sure both sides will be battling like mad in order to get three more points on the board. I would take a draw from this fixture but I don't think I will have to. I think United will win this game, 2-1.