Leeds United are back in action this Tuesday after their third round F.A. Cup exit at the hands of Arsenal meant they were not in action at the weekend. Birmingham are the visitors to Elland Road as Chris Hughton's men aim to get back into the Play Off places. Simon Grayson and his team have a similar objective and will be looking to maintain their unbeaten League run in 2012 which stretches to three games. After 90 meetings between the two sides, the scores are level with both sides having won on 33 occasions, while 23 have been drawn, however a win for the Blues would be their third in a row against United. Who will edge ahead tomorrow night?

Simon Grayson has no new injuries following United's 3-1 win over Ipswich 10 days ago, although new signing Robbie Rogers may be given his debut after the formalities of his move from America were finalised. Luciano Becchio may earn his place back in the side after a short cameo against Ipswich saw the Argentine grab a goal.

Stephen Carr, who has been out since mid December could return for the visitors. The Irishman, who is Birmingham's captain has been nursing a knee injury. Former United loanee Marlon King is also expected to return after being out with a thigh injury.

Birmingham have a number of good players and one who the Whites need to keep their eye on is Adam Rooney. The 23 year old who smashed in 44 goals in three years for Inverness Caledonian Thistle, moved to Birmingham in the summer after his contract with the Scottish Club expired. The namesake of Wayne has scored 6 times so far for the Brummies including two at the weekend against United's local rivals Sheffield United and will be hoping to continue his recent run of form when the Blues arrive at Elland Road on Tuesday night. 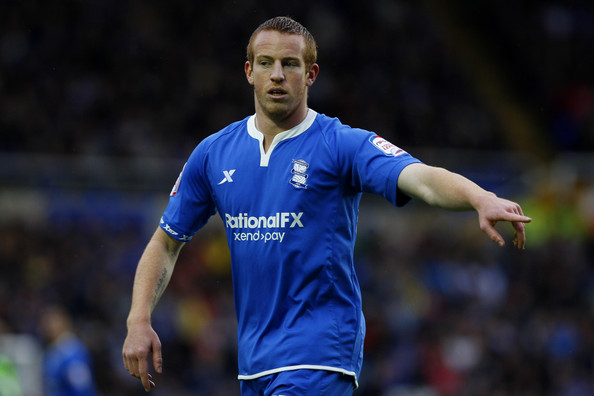 Rooney has netted six goals so far this season.

So here we are again, another big game for Leeds United. If United's performance is as bad as it has been of late then Birmingham should win the game with ease, however Leeds are due a performance. Tomorrow (Tuesday) is deadline day and after the departure of Jonny Howson the United faithful would have hoped there would be more debutants than just Robbie Rogers but it has been same old, same old as far as transfers go. I think we will win tomorrow though, although I do hope we haven't used all our luck up already after getting incredibly lucky in recent weeks. Will we finish up against 11 men for the first time in the League so far in 2012? Who knows, we might even be toasting some new signings come Tuesday night, doubtful though, I know. Nevertheless, Come on Leeds!