Leeds United are back in action just 48 hours after their humiliating 4-1 away defeat to local rivals Barnsley.United have now lost three games in a row and are without a win in four going into 2012. Burnley on the other hand have won six games out of their last seven and will be confident of grabbing all three points in West Yorkshire. A win would see Burnley claim their fourth in a row with the Clarets keeping clean sheets in each of the last three and they haven't lost away since the 22nd November. It isn't all doom and gloom for Leeds fans though because Burnley have only beaten Leeds twice in 37 years, the last coming in 2004 when the Clarets came out on top, 2-1.

Tom Lees is back in contention for the Whites after the young defender was missing last time out due to concussion sustained during the boxing day clash with Derby. Robert Snodgrass and Jonny Howson both remain on the sidelines beside long term absentee Davide Somma.

It is likely that there will be several other changes to the United starting eleven after Grayson suggested some Leeds players had played their last game for the club after the diabolical showing at Barnsley. A new player that Grayson will be able to call upon is Andros Townsend who joined on New Years Day on loan for the rest of the season from Tottenham.

The away side's only concern is Michael Duff who faces a late fitness test. The defender missed the win at Hull on New Years Eve with a hamstring problem.

Burnley's number nine Jay Rodriguez is a homegrown hero who has been in fine form during the last two championship seasons. Rodriguez has put a frustrating broken ankle during Burnley's Premier league season well and truly behind him by hitting 27 goals in all competitions in the last season and a half. The England under-21 International scored Burnley's goal when the two sides met at Turf Moor in November and will be keen to add to his tally against Leeds when the sides meet at Elland Road on Monday afternoon. 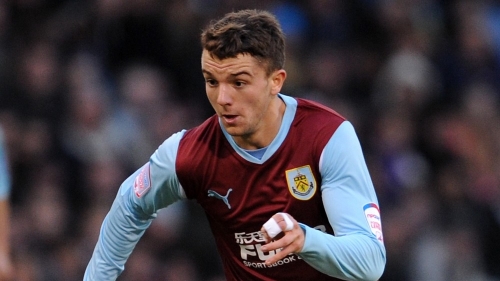 Jay Rodriguez is a product of Burnley's academy.

Leeds could fall as low as 15th if results don't go their way on Monday and another negative result could see Simon Grayson lose his job. Burnley are in sensational form but at the same time if United win they can leapfrog the Clarets in the table. I really don't know what to expect tomorrow but I can't really predict anything other than a Burnley win.