Interview with an away fan: Brighton

Share All sharing options for: Interview with an away fan: Brighton

Leeds tackle Brighton tomorrow at their brand new AMEX stadium, so I decided to have a chat with Stefan Swift, the editor of the fanzine The Seagull love review. You can also follow the seagull love review on Twitter. 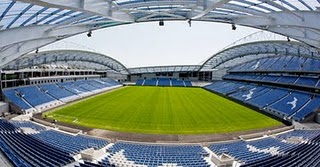 You have now lost twice in a week, are you worried that your form will now dip after such a fantastic start?

As Albion fans, we've been worried all season that losing would happen (and most of the summer too) but, in reality, we expected all games to be tough like the Leicester and Liverpool ones so the fact they haven't means we're still winning in some way. Everybody expected Leicester to start the season better than they have done so it was no surprise they turned up against us and turned us over. We weren't as good as we have been but credit to Leicester - they closed us down very well high up the pitch and made us play long ball, which isn't exactly our preference. As for Liverpool, we're just happy we got to the 4th round of the League Cup - that doesn't happen often. We don't particularly agree with them but the abundance of half Brighton half Liverpool scarves echoed that. What was more surprising was the amount of people buying those scarves pre match - if you hold out post match, you can buy them well cheap.

I think it's fair to say you've been brilliant so far, did you expect this start and what are the expectations for the season?

If you put trust in Gus, then we'll always be fine so in a way it was expected. However, we're a nervy bunch thanks to the last twenty years or so - we never admit we might do well. Expectations amongst the sensible ones are still quite lowly. I'm happy with 21st to be perfectly honest but the way we've started we like to hope we'll be top half. Play-offs would be incredible but there are many strong sides in this division so let's not get carried away. It's still early but if we play like we can with the money we've spent, there's an outside chance of promotion.

Leeds fans really liked Gus Poyet, and it became apparent he was the brains at the club when he left and we were terrible. It's clear he has been a revelation for you but just what has changed at Brighton under him?

Super Gus has been given licence to run the club, not just the team. It's no surprise that the club have put in a planning application for a training academy and he has revolutionised the whole set up. Talk is that the development squad plays exactly the same way as the first team which is sensible really but something a club like ours never even thought about. The kids coming through these days know him from his Premiership days and, like it or not, the youth of today look up to figures like that. It gives us an incredible advantage in signing players. He is, quite simply, a God and we will be back to the usual ineptness when he moves on.

Craig Mackail-Smith joined in the summer, when many expected him to move to the Premier League. Is he the man to grab 20 goals a season for you, and how has he played so far?

CMS started the season in terrific form but has tailed off slightly in recent weeks - ever since he played against his old club Peterborough in fact. He missed a sitter at Leicester but we'll forgive him that if only for the sheer amount of running he gets through over 90 minutes. He will get 20 odd goals over the season I should think but, even if he doesn't, he brings so much energy and provides so much space for the rest of the team, it's unbelievable. I know he is a striker and goals are ultimately what he will be judged on but he is a different class regardless of his scoring ability.

You signed Vicente just after deadline day. He was a fantastic player in the past and is only 30 so he could still show the Championship how it's done. Just how excited are you by the deal?

Excited is an understatement but will he be fit? Admittedly, he came off the bench against Liverpool and looked very comfortable - we're hoping he becomes as much a leg end at us as he did at Valencia. It just shows how far we've come in a short space of time. All under Gus really.

On deadline day you apparently came in for Billy Paynter, why would you do this?

He is one of those players we have always been linked with and we've finally reached a position where we could sign him up so perhaps it's the emotional attachment we have for a player that regularly used to turn us down. Either that or it's because we've got Marcos Painter and Gus was trying to get the decorators in.

Casper Ankergren wasn't the best goalie we've ever had. But he certainly did a good job for us when we needed him. How has he been for you since he joined?

Amazing. Not only does he smoke 20 Malboro Lights a day but he is also a decent keeper. More importantly for us last season, he was a great outfield player as well. Even this season, at Leicester, he stood with the ball at his feet for at least 60 seconds whilst the Leicester players refused to case him down. Down on the coast we call that the ultimate flair. Plus, we met him on a chance encounter back from Rochdale last season - not only was he smoking but he was going for a night out. We appreciate a party animal even more than a decent player.

Craig Noone has been on fire so far this season - quick, small and a proper winger with a decent shot. All the wingers are the ones to be wary of - Kazenga LuaLua is probably the fastest player we've ever had (don't worry too much, his crossing needs a bit of work) but he also has a lethal shot in his armoury. And Will Buckley can easily beat players too but I shouldn't think we'll have three wingers on the pitch at once. 19 year old centre back Lewis Dunk has had a stormer so far this season and is being tipped for a big money move in January.

It would be hilarious to say Billy Paynter but I'd have to say Robert Snodgrass for his Scottish credentials (as we can't have Max Gradel anymore).

1-0 us as we're yet to lose in the League at Falmer. But as long as we don't lose, you can have a point.