Bessone departs for the Premier League...somehow

Share All sharing options for: Bessone departs for the Premier League...somehow

Those of you reading this article will probably have had to wipe your eyes to check what you have just read. Yes the headline doesn't lie and that s*** Argentine left-back you will have forgotten about has finally left the club.

But unlike most transfers that went through on deadline day this one was on a free, o yes lovely Ken thought it would nice to let Bessone leave on a free. Terminating his contract by mutual-consent allowed Bessone to find another club and judging by what we witnessed he should have been aiming for League Two. However somehow Bessone has landed himself a two-year deal at Swansea (yes that Welsh team in the Premier League).

Bessone moved to Leeds from Swansea only 14 months ago, and his signature seemed at the time a good move for both player and club. Tonnes of Swansea fans were gutted he had left the club, which gave us Whites the impression we had signed a pretty dam good left-back. In his first game at Elland Road it was clear we were wrong, so so wrong. I don't think I have ever seen a player so scared to play football, scared to touch the ball and petrified of playing the ball towards the opposition net. Eventually dropped after the Barnsley game Bessone then went on loan to Charlton in League One before returning to Thorp Arch this summer.

Yesterday was a terrible day for any Leeds fan, I'll voice my opinions on all this later today. But the only glimmer of hope was Bessone off the wage bill and far away from Leeds as possible, and Wales is good enough for me. Good luck to the lad, I'm sure he never wanted to fail in a Leeds shirt but he did. Bessone will probably now go on to become a Premier League legend in defence, because that is usually what happens when a flop departs Elland Road. 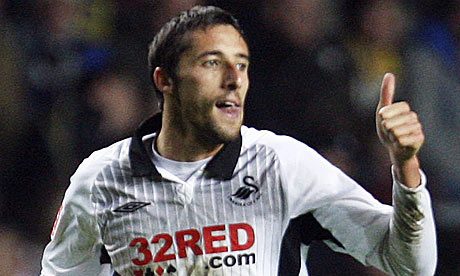