Interview with an away fan: Doncaster Rovers

Share All sharing options for: Interview with an away fan: Doncaster Rovers 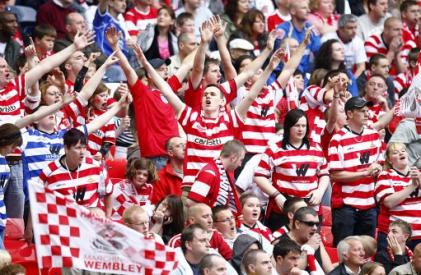 You sit rock bottom of the Championship, did you expect a poor start or were you optimistic ahead of the new campaign?

I was definitely more optimistic for the season, we had made some great signings and pre season seemed to go well. There were some worried fans though, and it looks like they were right!

You are known to play some good football under manager Sean O'Driscoll how have you been playing so far this season?

We seem to be playing better this season compared to the last. We've outplayed both Forest and West Ham but we're still lacking up front, putting all our good work to waste.

You struggled last season and haven't started this campaign too well. What needs to change, manager, players?

I know it's starting to sound like an excuse but we really struggled with injuries last year and this year is heading in the same direction. I know that it wasn't just me last year saying that the physio and health side of the club was failing. Some fans are blaming the manager this year though, saying that he has lost the plot.

You signed ex Leeds captain Richard Naylor in the summer, how has he been playing?

He looks like a strong defender, something we've been lacking recently. Although I think he was at fault for West Ham's winning goal and he seems a bit slow at times.

Everyone loves a cup derby, do you expect Donny to raise their game for Tuesday and are you confident of a win?

I honestly can't see us getting a result with our luck so far but stranger things have happened and it would make sense for us to fail miserably in the league but succeed in the cup. If we play how we have in the last few games we stabs with a chance.

Expectations for the season?

Our luck has got to change soon and if it does soon, we could have a successful season but it has to change soon. It's just getting out of this rut which is going to be really hard seeing as we haven't won since Derby in March.

Which Donny player will pose a threat to Leeds?

Kyle Bennett can weave through a team like a fish through water and is has a great right foot on him, he's unlucky not to have scored in the league yet this year.

Luciano Becchio would be a welcome addition to our side, giving us someone up front who is likely to score.

As I've said it'd be just like Rovers to have a fantastic cup run but with a terrible season so I think it could stay 0-0 for the whole game, sending us through to penalties where we could just edge it.

Big thanks to Lewis for the interview.