Kasper Schmeichel completed his transfer from Leeds United to Leicester City for an undisclosed fee believed to be in the region of £1 million on Monday afternoon.

The 24-year old Dane put pen to paper on a three year contract at the Walkers Stadium to work with former England boss Sven Goran Errikson who he has previously been involved with at Notts County and Manchester City.

Schmeichel only spent a year at Elland Road, making 40 appearances for Leeds after signing from Notts County on a free. Kasper had expressed his surprise and disappointment that a bid from Leicester had been accepted, stating on Twitter 'I was enjoying being a Leeds United player and was looking forward to winning promotion this season with the club' however the former Manchester City trainee becomes Sven's third summer signing and the latest player to depart Elland Road, following the likes of Bradley Johnson, Neil Kilkenny, Richard Naylor and Shane Higgs out of the constantly revolving doors.

With Pre-season training starting on Thursday, Simon Grayson has a lot of work on to re-build his squad which at present is missing the core of it's midfield and only includes one senior goalkeeper. 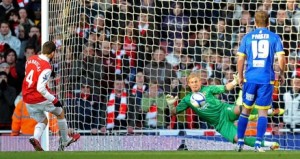