Four second half goals gave Leeds United a resounding victory over play-off rivals Nottingham Forest. The scoreline flatter's the Whites, who were well and truly dominated by Forest until the sending off of Chris Cohen. Simon Grayson named the same starting eleven that slumped to defeat at Sheffield United just over two weeks ago.

Leeds failed to settle in the opening exchanges, and should have gone behind when Marcus Tudgay failed to find the target from a Joel Lynch cross. The match began to resemble a game of head tennis with both sides failing to bring the ball down and play it along the deck. Leeds' best chance fell to Scottish international Robert Snodgrass, the winger did brilliantly to cut into the box, but couldn't get the ball out of his feet before firing his shot into the hands of Lee Camp.

The chance of the half fell to Forest, Marcus Tudgay beat two men in the box but the Leeds defence managed to scramble back and clear a shot off the line. The first big cheer of the afternoon came at the interval, when the big screen showed that the scum, Manchester United were getting beat, as usual though they came back to win.

In the second-half the one man advantage began to tell, and United finally took the lead thanks to Captain Jonny Howson. Lichaj's cross found Howson who brought the ball down and placed his shot past Camp. It was two nil seven minutes later, Leigh Bromby's header hit the post and fell to Becchio, who calmly nodded the ball into an empty net. Leeds were now on top and dominating the game, and should have scored through Snodgrass and Gradel. Snoddy was unlucky to hit the crossbar, and Gradel was wasteful after firing wide.

Once again Grayson's men conceded but it was thanks to a stunning strike. The Leeds defence were too busy watching Bromby and Tyson tussle in the box, when Gareth McCleary curled his left footed shot into the top corner. At 2-1 the game wasn't over and it would have been typical Leeds to concede once again. For a change Leeds kicked on and killed the game off, Gradel reacted quickest and placed his shot into the bottom corner.

Jake Livermore made his Leeds debut, he replaced the impressive Barry Bannan with 15 minutes remaining. The Leeds faithful cheered every pass, as the players became to rub salt into the Forest wounds. Gradel then added more misery for the away side, Livermore did well to test Camp, who could only parry to Gradel, who tapped the ball home. 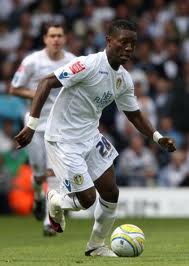 A 4-1 result is a fantastic victory for Leeds, who have now gone four points clear of Forest. A win doesn't secure a play-off spot, but it will help come the end of the season, it also means that Leeds keep up with Norwich. The sending off did change the game, but it is about time Leeds got some luck when it comes to refereeing decisions. At full speed the tackle looked a definite red card, but on second viewing it did look a little harsh. Billy Davies can't really complain, he gets a second look, the referee doesn't. United travel to Millwall next Saturday which will be a difficult encounter, but Leeds will go into the game full of confidence after today's result.

In the first half Leeds were dire, but the sending off changed the game and allowed the players some freedom. For me Jonny Howson was brilliant, he scored the first goal and drove the team forward from midfield. The extra space in midfield allowed Howson to run freely and give Becchio support.