Leeds United finally won a midweek game thanks to goals from the most unlikely of scorers, Neil Kilkenny and Billy Paynter.

Leeds were looking for revenge against North End who had embarrassed them earlier in the season, when they come back to win 4-6at Elland Road. Simon Grayson made one change to his starting line-up, Luciano Becchio dropped to the subs bench, with Billy Paynter coming in to play the lone striker role. New loan signing Barry Bannan was on the bench after completing his move from Aston Villa yesterday.

United opened the scoring on the half-hour mark, Neil Kilkenny reacted quickest, and placed the ball into the back of the net via the post, after Snodgrass' shot was blocked. Leeds had to wait until the 57th minute for their second goal, Billy Paynter finally netted his first goal for the whites. Paynter challenged well in the air, and carried the ball into the penalty box, before smashing the ball into the net. It was a real sense of relief for Billy, who hasn't had much luck in recent weeks, the fans will now hope he will finally start scoring on a more regular basis. 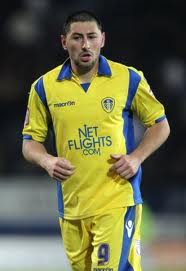 Leeds' took their foot off the gas and were punished by a wonderful goal from Ian Hume. Keith Treacy picked out Hume, who turned on the edge of the box, and fired the ball into the top corner to give Preston a glimmer of hope. Bannan was introduced late on to make his debut for Leeds, and he helped Leeds hold on to claim a vital three points.

The Whites are now 5th in the Championship and only three points away from automatic promotion, after several results went their way. The players need to remain grounded, and focus on each match as it comes, automatic promotion was a distant dream after the Swansea game, but this weeks results have changed everything.