Leeds United were taught a footballing lesson today by a Swansea side at their top of their game. United were beaten in every department and looked tired once again. The midfield found it hard to settle and were given the run around, the 4-4-2 formation just quite simply didn't work.

The Swans started the game the better side, Nathan Dyer was causing problems for the out of form defender George McCartney. Stephen Dobbie playing just behind Luke Moore was given far too much space all day, and he nearly broke the deadlock in the opening minutes, but his effort hit the upright. Swansea continued to dominate during the opening 15 minutes, and took the lead thanks to Scott Sinclair. Sinclair picked up the ball on the edge of the box, and played a wonderful one-two with Luke Moore, before burying the ball into the back of the net.

Leeds rarely threatened in the first half, Somma came close when he hit the bar with a header. United should have been given a stone wall penalty when Robert Snodgrass's shot was blocked by Tate's hand. Just as Leeds looked like they could grab a goal, the half-time whistle went at the wrong time.

In the second-half Leeds came out of the blocks with some intent to go forward, they looked more solid as a unit and you felt that they could snatch a point from the Liberty stadium. Swansea were then awarded a penalty, after Max Gradel bundled over Dyer on the edge of the box. Sinclair stepped up and calmly rolled the ball into the bottom left hand corner. Grayson threw on Sancez Watt to try and claw something from the game, the Arsenal loanee replaced Luciano Becchio. 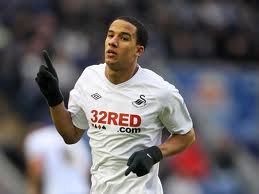 Watt showed his pace to win a free-kick and cause the Swansea defence some problems, but it was Mark Gower who was causing Schmeichel problems at the other end. Schmeichel was called into action, when he was forced to save low down from Gower's free-kick. Schmeichel was forced to pick the ball out of the back of his net minutes later, Dobbie split the Leeds defence in two with a pass to Luke Moore who placed the ball over Kasper into the back of the net.

Ben Parker and Billy Paynter were introduced late on but it was far too late for Leeds. Paynter showed some nice touches, but didn't really get a chance on goal.

Unfortunately a Swansea player has to win today's award, Stephen Dobbie and Nathan Dyer were brilliant today. Dobbie was given space in the middle of the park and was a threat when given the ball. He also created the third and final goal for the Swans. Nathan Dyer's pace was a constant danger, he had McCartney rapped up in his pocket today. However the man of the match award has to go to Scott Sinclair, he grabbed two goals and could have grabbed a hat-trick.

In the end it was a well deserved victory for Swansea, they were superior to Leeds. Grayson was forced to change the formation, although 4-4-2 has worked in the past, we all know the gaffer prefers to use his favourite 4-5-1. I have said in the past how poor George McCartney has been, and today he was terrible. He constantly struggled to deal with the pacey winger Dyer, and eventually was brought off after being booked. Kilkenny was out of his depth today, he was too weak in the midfield but wasn't helped by any of his midfield counterparts. The penalty decision could have changed the game, but that still doesn't excuse some of the defending for their goals. Nobody in a Leeds shirt today deserves any credit, many tried but simply running around in circles isn't good enough.

Our attention must turn to Doncaster at home next week, I think it's fair to say Leeds are now out of the automatic promotion places, but they have every chance of still challenging for the play-offs. We would have taken this situation at the start of the season, and now need to regroup and keep going right up until the end of the season. Grayson should look to mix it up, we have been playing the same eleven for some time now, it may be time for the likes of McCormack, to come in and see if they can have an impact.