Johnson linked with move away from Elland Road

Share All sharing options for: Johnson linked with move away from Elland Road

Transfer-listed midfielder Bradley Johnson has been linked with West Brom and Nottingham Forest according to Skysports.com.

Johnson, 23 is out of contract in the summer and was placed on the transfer list in November after turning down numerous contract offers. Since then Johnson has been a key player within the Whites team and well and truly deserves a new contract from Mr.Bates.

In January Johnson was supposedly wanted by several premier league club's, such as Bolton Wanderers and Wigan Athletic. It now appears that the midfielder's efforts on this pitch have not gone unnoticed with both West Brom and Forest looking to snap him up in the summer for free.

If Forest manage to get promoted, and West Brom stay up I feel the move to the Premier League may be too good for Johnson to turn down. Saying that we have to be optimistic with our own chances of promotion and he appears to be giving his all for the white shirt, so you never know a contract could be signed. With Grayson busy with on the pitch matter's, I imagine the earliest contract negotiations will be in the summer so we will just have to wait and see. 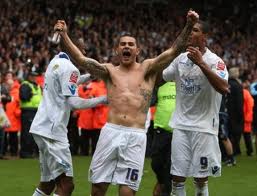