Stewart set to stay at Leeds

Share All sharing options for: Stewart set to stay at Leeds

Former Hearts midfielder Michael Stewart will be staying at Leeds after impressing during his first trial period.

Stewart, 29 has been on trial at Leeds for two weeks, and Simon Grayson has seen enough to keep the player and take a further look. Stewart brings plenty of experience with him to Thorp Arch, having started his career at Manchester United and picking up over 200 appearances for Nottingham Forest, Hibernian and Hearts. 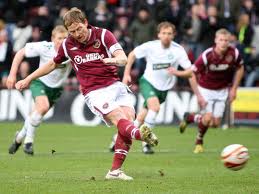 "He's done okay while he's been here and he's shown the qualities that have seen him play for the likes of Manchester United and Hearts. Because he's done well and fitted in well, we're going to take more of a look at him and see how things go." said Simon Grayson speaking on the Leeds United Official site.

Leeds are without a ball winning midfielder and Stewart could be the man we need, to improve our defensive errors. Although we have kept two back-t0-back clean sheets I still worry that we need to strengthen the midfield to help the back four.

Grayson also confirmed that the unknown French midfielder who was also on trial with the club has left. The midfielder played in a behind closed doors game against York but has obviously not done enough to impress the Leeds boss.