Goals from Robert Snodgrass and Max Gradel helped Leeds to a comfortable 2-0 win, away to Bristol City at Ashton Gate.

Simon Grayson decided to revert back to Leeds' familiar 4-2-3-1 formation, with Neil Kilkenny replacing striker Davide Somma. Somma only returned to England yesterday after representing South Africa so tiredness would have been an issue. The game at Ashton Gate was a sell out with Leeds well supported as usual, with around 2,000 fans making the trip south-west.

Leeds' opening goal came thanks to Robert Snodgrass who capped off a perfect week with a superb solo effort. Snodgrass recently capped by Scotland, found some space in the box and calmly slipped the ball past David James. Grayson's men dominated the opening 45 minutes with Bristol's only real chance coming in the 43rd minute, but Marvin Elliott was wasteful and fired his shot wide of the goal. 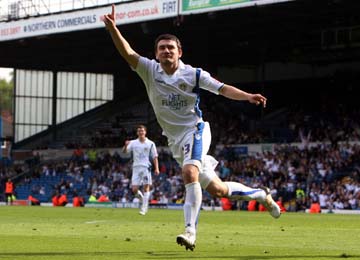 Earlier in the second-half Bristol could have made it 1-1 but forward Bret Pitman could only fire his shot into the side netting. Leeds then punished the Robins and doubled their lead through Max Gradel. Snodgrass was involved once again, his shot was blocked and Gradel reacted quickest to slot the ball into the back of the net.

Kasper Schmeichel was called upon in the 69th minute, Leeds failed to clear a corner and the Dane was on hand to save with his legs. Bristol kept pressing to try and get back into the game but Leeds held on for a vital three points and another clean sheet.

Leeds have now made it five games unbeaten and are now keeping up with the promotion chasers. The whites are sixth in the table and a six points clear of 7th place Burnley. Keeping a clean sheet will give the boys confidence, especially seen as we have been conceding far too many goals this season. The next two weeks are key for Leeds, Norwich and Barnsley are next at home, followed by Swansea away.

A good three points is what many expected but the players had to deliver, we were also unlucky as Norwich, Swansea and Cardiff all grabbed late goals to win. Hopefully we can score a late goal next week against Norwich at Elland Road.