On loan Aston Villa defender Eric Lichaj will make his debut for Leeds United tomorrow when they take on Bristol City at Ashton Gate.

Lichaj replaces the injured Paul Connolly at right-back who is out due to a hamstring injury. Sanchez Watt is also out with a hamstring problem and Simon Grayson will assess the fitness of Ramon Nunez and goal machine Davide Somma. Both Somma and Nunez have been away on international duty and will obviously be struggling with fatigue.

Bristol City striker Nicky Maynard will be available for selection after recovering from his knee surgery, which he underwent last summer.

Both teams will be going into the game full of confidence, Leeds are unbeaten in four and are lying sixth in the table. Bristol City are on the up after many feared they were possible relegation candidates. The Robins beat Preston 4-0 away last time out so they will feel they can take all three points due to Leeds' defensive issues. Leeds were the victors of this clash earlier in the season, winning 3-1 thanks to a Luciano Becchio hat-trick. 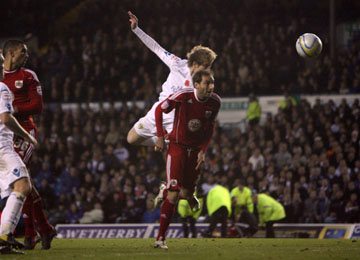 Leeds' defence is still a problem even though we managed to keep a clean-sheet last week vs Coventry. I hope Grayson sticks with the 4-4-2 because Somma is a threat to any opposition defence and can grab a goal from anywhere. Somma however may not be fit, so I would hope Grayson would give Billy Paynter or Ross McCormack the chance to shine. A victory for Leeds tomorrow will be fantastic seen as both Norwich and QPR have difficult fixtures. My prediction for tomorrow's game is a 2-1 victory to Leeds, I expect Leeds to just have enough quality to see off the Robins, and hopefully I will be right.