Leeds United make the long journey to Watford this weekend as the Whites look to make it three wins on the bounce. The hosts are on a good run of their own and find themselves four games unbeaten which includes a 2-1 success away to Ipswich in their last outing. Watford and Leeds have some recent history after the London club shattered United's chances of returning to the Premier League in 2006 by beating them 3-0 at the Millenium Stadium in Cardiff in the Championship play off final. The Whites have had the best of this fixture since then though having won two and drawn one of the last three meetings.

Leeds will be without their skipper Jonny Howson after it was revealed this week that the midfielder, a product of the Leeds United academy will be visiting a specialist regarding the knee injury he picked up against Millwall last week. Fellow Midfield man Michael Brown may also miss out after after the former Portsmouth player also picked up an injury last time out.

The lack of fit Midfielders left at the club may mean that top scorer Ross McCormack gets a recall after the recent change of formation meant the Scot was left out of the side. McCormack may fill in just behind the striker in the 'Jonny Howson' role or Leeds boss Simon Grayson may revert back to a 4-4-2 formation which would probably see McCormack partner Becchio up front.

Another option for Grayson is Lloyd Sam after the winger replaced the injured Brown against Millwall and impressed during the second half. Sam's possible inclusion may result in Danny Pugh playing in central midfield, a role in which he flourished last week.

Martin Taylor and Steven McGinn remain on the sidelines for the hosts while Lloyd Doyley may return after overcoming a thigh strain.

Watford's 20 year old front man Marvin Sordell has really developed as a footballer over the last year or so. After scoring his first Watford goal at Elland Road in the League Cup in 2009, Sordell has gone from strength to strength and finished last season with 15 goals. With pace to burn, the England Under-21 International will be a real threat to the United defence and with seven goals to his name already this campaign, the talented youngster will be looking to add to that tally on Saturday afternoon. 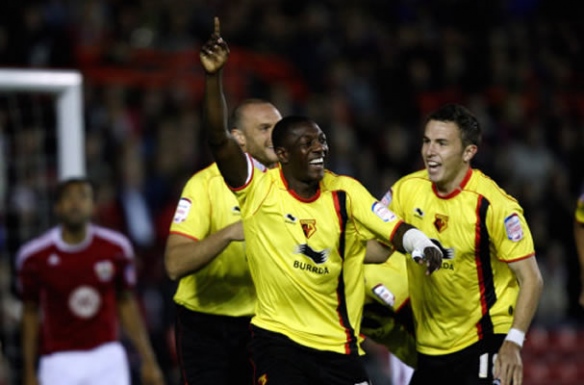 It's going to be a tough away day, Watford have really picked up their form lately and it certainly won't be a walk in the park for Leeds. However, I believe if the Whites play to the best of their ability, they are more than capable of coming back to West Yorkshire with all three points. I think we'll win a highly contested game, 2-1.