Last Sunday saw the untimely and tragic loss of Gary Speed. As soon as the news broke early Sunday morning, tributes were flying in from all over the world, all with one thing in common. Gary Speed was loved by everyone.

As a relatively young Leeds fan I have no memory of Gary Speed ever playing in the famous white shirt. I can't look back on memories and remember a game where he did this or that. I remember his time at Newcastle and Bolton well, but just as is managerial career was really looking up he was gone. Stories from loved ones, friends and other fans tell an insight into how good he was for Leeds and just how fondly he will be remembered.

This week has been very difficult for many fans, football followers and the general public. Anyone that met Gary Speed has something good to say about him. Anyone that didn't is instantly moved by the stories of those that did.

The last six days have been surreal in terms of football, the results for Leeds United as well as Speed's other clubs have not mattered. At times like this you realise there is far more to life than football.

On Monday the tributes began to gather at Elland Road and I felt it was right to go pay my respects. The atmosphere that night was sombre and silent. The cold December wind was in full force, but nobody cared. The silence was broken every now and again with the noise of people sobbing, or their cameras flashing. 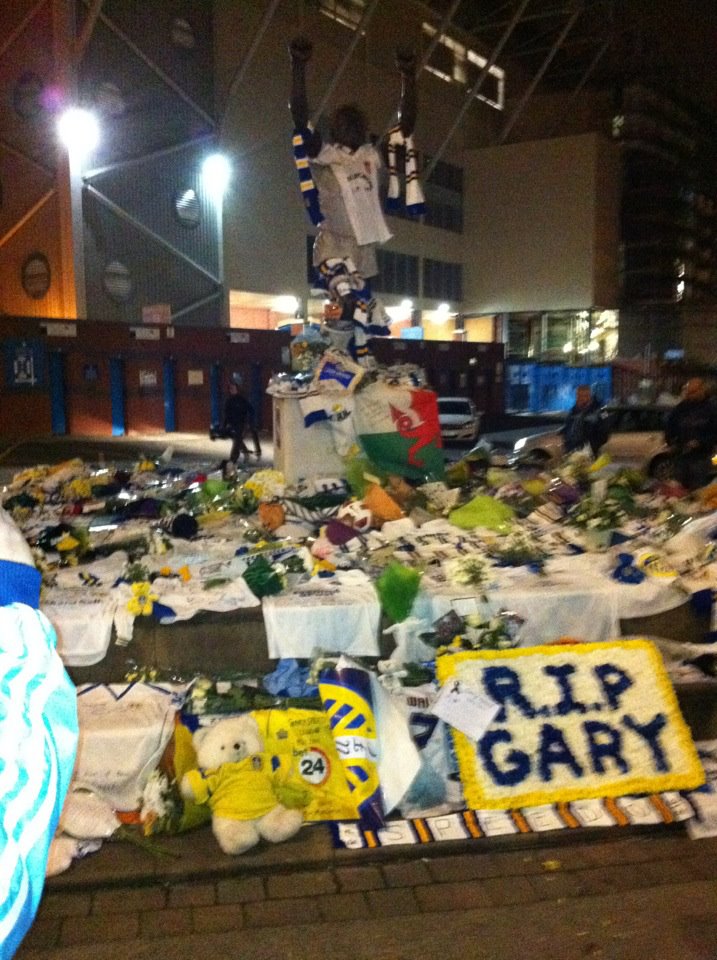 Being there on Monday is something I don't think I will ever forget. Seeing a Manchester United shirt underneath Billy is a sight I or anyone else didn't think they would see, but the fact it has happened shows how much Gary Speed was respected within the game.

The tributes from the fans in attendance on Tuesday night away at Notts Forest was fantastic and it was a fitting tribute, as well as a brilliant performance. But today's game against Millwall was when fans, family and friends could remember Speed in their own way.

Walking from the City Centre to the Church was an experience to say the least. Conversations amongst fans weren't about tactics or players or Bates. The more people I walked past the more I heard the name Speed, or do you remember when him and Batty/Strachan/McAllister did this. Passing the burger fan opposite the statue is where those conversations seemed to pause for a moment, as most made their way to the statue to pay their respects.

The club programme had sold out at the three usual places I purchase it. The programme never sells out, in recent years nobody seems to buy it without complaining about the price or how they don't want to give money to a Ken Bates run club. Yet today the fans dug into their pockets to read the thoughts of those that cherished his days playing for Leeds.

Speed's name rang out amongst the ground as the fans waited for the teams and former players. The tribute video just before the players entered the field was moving, and had several around me wiping away the tears. The tribute music by Oasis was the perfect choice for a sensational video. The return of Gary McAllister, David Batty and Gordon Strachan got even more crying as it returned old memories of one of the most gifted midfield's Leeds United or football will see from yesteryear. The minute's applause was deafening, and the final touch of leaving the reefs was first class.

The Leeds fans had their own special tribute once again. On the 11th minute the crowd erupted with the noise of Speed's name. As the minutes went by my throat began to hurt (I'm sure many others had the same problem), but watching those around you made you carry on. The atmosphere within Elland Road was back to its usual high decibels, for the first time this season. The 27,161 within Elland Road were there to make noise for a very special man. As the 11minute chant finished for Speed, there was no fairytale goal from Snoddy's left foot, yet people were hugging each other after yet another emotional moment in a very turbulent week.

I'm sure Gary's family in attendance today were very moved by the tributes and effort by the club and the fans. Leeds fans flocked from around the country to gather and show both the world and Gary's family just how much he meant to them, and in doing so proved just how good they really are. In the past Leeds fans have taken some flak, most of it uncalled for because the country hates us. But it brings us together and unites us as one. Today has once again shown that Leeds fans are the best in the country, no matter how hard others try to deny it.

After a surreal week the players have delivered with six goals and six points and two clean sheets. The staff at the club have done brilliantly in what must have been a terribly hard week. The feeling leaving Elland Road today was one of immense pride, Leeds United said goodbye in their own way to a man that will never be forgotten.