Despite thoughts not being on the game, Leeds United are back on their travels this Tuesday night, just a few days after the humiliating defeat at home to Barnsley at the weekend. United followed up two great results away from home with yet another poor performance in front of their own fans at Elland Road. The 2-1 defeat means the Whites are yet to win at home since beating Portsmouth 1-0 on the first day of October but Simon Grayson's men will be looking to continue their fine string of results on the road and make it 3 away wins on the bounce at the City Ground.

The clash with Forest also comes just two days after the tragic news about Gary Speed. There is a planned minutes applause for the former Whites midfielder and the travelling Leeds fans plan to pay their respects by chanting Speed's name for 11 minutes from the 11th minute of the game. 11 being Speed's number whilst at Leeds. Speed's friend Simon Grayson told the clubs's official site: "Everyone is in a state of shock, but you have to put your professional head on. Being the great professional that Gary was, it's exactly what he would have wanted, but it'll still be in all our minds. It would be a fitting tribute if we could get three points. Our fans will show their respects and hopefully my team can do that justice. I hope we can produce a performance and get a result."

Ireland International Darren O'Dea returns to the squad for United after sitting out the loss to Barnsley through suspension. Grayson must decide whether to recall or O'Dea or continue with Lees and Kisnorbo at the back.Luciano Becchio was handed his first start of the season in the league at the weekend and despite not impressing, will be hoping to keep Andrew Keogh on the bench.

There are no fresh injury concerns for the United gaffer, though the likes of Danny Pugh will be pushing for a recall after his recent hamstring problem meant he had to sit on the bench last time out.

There are also no new injuries worries for Forest's new boss Steve Cotterill and Paul Anderson, Andy Reid and David McGoldrick all made a good impression in the narrow defeat to Cardiff last time out when they came off the bench. Strikers Dexter Blackstock and Ishmael Miller are both available again after recent injury lay offs.

Nottingham Forest's top scorer this season Robbie Findley is something of an unknown in English Football. The US International signed for Forest in January of this year but unfortunately for him got an injury in his first training session. Findley though, has hit 5 goals in 10 starts so far campaign and has begun to make up for lost time. The front man who is known for his pace, started his career in the MLS with L.A Galaxy but his best spell to date came at Real Salt Lake where he hit 29 goals in 91 appearances. Whether Grayson opts to recall O'Dea or Lees and Kisnorbo continue at the heart of United's defence, they will need to watch out for Findley's pace in order to help keep scoring down to a minimum. 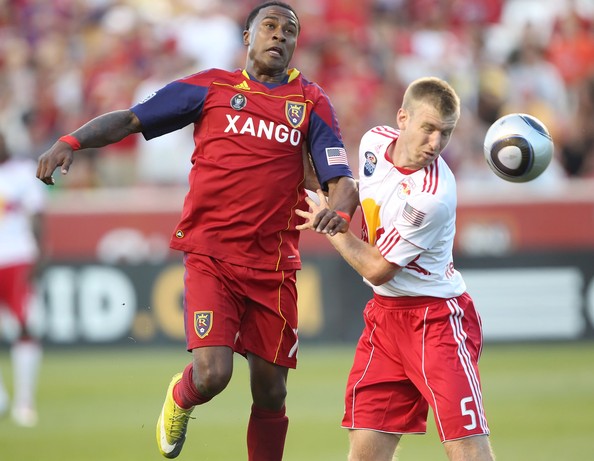 Robbie Findley in action in his MLS days.

Everyone will be looking for a reaction from Leeds at Forest after another poor performance and hopefully it will come. Not only do we need to bounce back from the poor showing at the weekend but we also need to go out there and perform well for Gary Speed. With Forest having a really poor start to the season, they are 20th in the league and if we are serious about getting in the play-offs we need to go out and win these types of games. I think we will probably do things the hard way again tonight, I think we will concede the customary goal and come from behind to win 2-1.