Interview with an away fan: Birmingham City

Share All sharing options for: Interview with an away fan: Birmingham City

Leeds United face a difficult task on Wednesday night when they face an in form Birmingham City at St Andrews. The Blues have won five on the bounce but the Whites certainly have what it takes to cause some problems. I spoke to Kev from Birmingham City blog Joys and Sorrows, which you can follow on Twitter here. 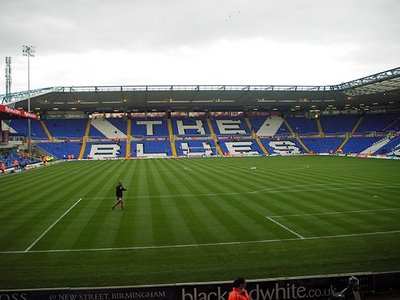 You sit 14th in the table but have three games in hand on everyone else. Are you happy with the start you've made to the season?

Yeah of course. We have a virtually new side and it does take a while to gel. We started slowly but are now beginning to build some momentum.

Chris Hughton is a fantastic manager in my opinion and was treated horrendously by Newcastle. Were you happy with the appointment when it was made and is he the man to lead you back to the Premier League?

We did an article after McLeish left here on J&S and from day 1 I championed Chris Hughton to be our next manager. His record is terrific wherever he has been. He organises a side, plays football and appears to get his tactics and substitutions right.

You were relegated last season, the same year you won the League Cup. Within your squad you have some quality players and I think come the end of the season you will be challenging for promotion. What are the expectations for the season?

Although I think most know the answer to this... what are your thoughts on Alex McLeish leaving to go to your fierce rivals Aston Villa?

Hysterical. What? I can hear you cry, let me explain. He was already getting some stick, the cup run apart, we were playing poorly. Many of us feared relegation before the Wembley trip. He frequently played 1 up front with no pace in the middle and we were often beaten by 1 goal. So when he left, many were happy he went - although annoyed HOW he went. But then to see our nearest and dearest demonstrating and threatening to burn shirts, was great. Coupled with the fact a number of managers had turned them down. This was compounded by us getting Hughton, many I know would definitely have preferred Hughton to McLeish. As it stands now, Alex is doing a grand job. :-)

Birmingham have now won five on the bounce. What's taken you so long to get going, just the general new manager syndrome?

As I said before, the new squad gelling - but yeah the new man setting his own routines I'm sure was also a part of it.

Us Leeds fans know all about living the dream in Europe. How have you found it so far and have you been to any matches in Europe yet?

Really enjoying it. Not been to any games yet, although aiming to go to the last home game in the group stage v Mirabor. We have done ourselves and the Championship proud too in my opinion.

I'm guessing you consider the league to be more important this year, but do you want the club to forget about Europe or go as far as they can?

Chris Burke was a player I was desperate for Leeds to sign. How good has he been this year for the Blues?

Sorry to rub it in, but he has been fantastic. His control on the ball is brilliant, has a good cross and knows where the goal is.

Who do Leeds fans need to watch out for on Wednesday?

Burke and Beausejour on the right and left, then obviously Chris Wood has been scoring goals. But a special mention to Marlon King. Obviously he has done some terrible things, but he has been a real asset up front. he is strong on the ball, he makes space and creates chances.

I can't speak from any authority to be honest, I haven't seen any of your games this season yet. I see McCormack is your main goal scorer, but to be honest, I am very happy with our squad.

Prediction for the match? I'm going 1-1.