Leeds United entertained Coventry City at Elland Road as they looked to win their third game on the bounce and stretch their unbeaten run to six games. There wasn't much to think about in terms of team selection for Leeds boss Simon Grayson after a confident performance saw Leeds comfortably beat Doncaster last time out. However there was one change for United, as Andy Lonergan picked up an injury at Doncaster and he was replaced in the starting 11 by Paul Rachubka. 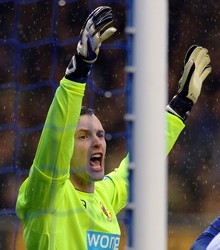 Paul Rachubka made his first league start for Leeds.

The Whites started the game in confident mood as you would expect and it wasn't long before the Scottish pair of Robert Snodgrass and Ross McCormack were combining. Snodgrass made a run down the right hand side before picking McCormack out with a lovely pass with the outside of the boot. However, the in-form striker couldn't keep his header down. The chances were starting to stack up for the hosts and Andrew Keogh cleared the ball for Coventry rather than direct a cross at goal. Keogh offers a lot to the side but finishing just isn't one of them. Rachubka was also called upon early on to make a good save following some jittery defending, United target Sammy Clingan got a shot away but Leeds' deputy keeper Rachubka was equal to it. The follow up was balooned over by Coventry's top scorer Lukas Jutkiewicz.

It wasn't long until Leeds did manage to convert a chance though and it was a finish from defender Darren O'Dea that the Andrew Keogh school of finishing would have been proud of. A Paul Connolly cross was deflected to the left hand side of the penalty area and the Irish International found himself unmarked. O'Dea put his foot through the ball and fired it into the bottom corner of the goal. From then on it was United's game for the taking and O'Dea was the first player guilty of passing up a good chance to stretch United's lead. Adam Clayton provided an inch perfect cross for O'Dea to nod home, however the centre back couldn't add to his early goal and headed wide. There was another fantastic opportunity to stretch the lead when brilliant build up play between McCormack and Keogh resulted in Ross McCormack firing over the net guarded only by two defenders after the goalkeeper was taken out of the game by Keogh's unselfish pass. It was from just outside the six yard box and you would have put your mortgate on McCormack scoring in the form he is in. 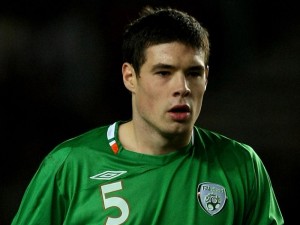 Leeds went in at the break 1-0 up and fully deserved their lead. Chances were created early on in the second period as Snodgrass, Pugh and Clayton all went close. Pugh's powerful header and Clayton's shot from just inside the box following good work from Snodgrass were both rebuffed by City keeper Murphy. While Snodgrass fired just wide.

With the game petering out, Grayson replaced McCormack and Keogh with Becchio and Forssell. This completely killed any threat United had and the home side struggled to the retain the ball from there on in. Luciano Becchio doesn't strike me as a man who wants to win his place back in the team and he just jogged around the field aimlessly without ever really touching the ball. Coventry had all the ball and United were camping out in their own half, a very bizarre tactic at home to one of the divisions poorer sides. Leeds were clearing the ball up to Becchio and Forssell and the ball was coming straight back. Vayrynen replaced Snodgrass as Howson was relocated to right wing and the home side tried to hold on to what they had.

For all their possession Coventry didn't look like they had a goal in them and other than a Lukas Jutkiewicz header which went close, it looked as though Leeds would hold on. However with more or less the last kick of the game Cyrus Christie pumped a ball into the box which didn't look particularly dangerous but Leeds Keeper Paul Rachubka thought differently and tried desperately to claim the ball. He couldn't hold on to it and his fumble fell to Richard Wood, who gratefully directed the ball into the goal and ensured United missed their chance to move into the play offs.

My view on the game:

This is by no means the end of the world but it certainly was hard to take. I stood there in disbelief as Richard Wood ran off celebrating but lets not blame this on Rachubka. He looked solid for 92 and a half minutes before his error. The introduction of Becchio and Forssell was the turning point for me, their lethargic performances were very disappointing. You don't really think much of it when you are in the lead but why is Grayson bringing on two strikers, at the same time, at 1-0 up at home? A very strange decision and one that certainly back fired for Grayson. Becchio doesn't look fit or interested and in my opinion he shouldn't be included until he improves because it has been the case now for a number of weeks. Positives include that we again looked fairly stable in defence. White continues to get better with each game and O'Dea seem to be forming a good understanding at centre half. The midfield just camped in our half and we brought the equaliser on ourselves. Fair play to Coventry, they didn't give up but we well and truly threw it away. We will just have to make up for it with three points on Saturday.