Leeds United 1-0 Portsmouth - What a difference a defence makes!

Share All sharing options for: Leeds United 1-0 Portsmouth - What a difference a defence makes!

On possibly the warmest afternoon Elland Road has ever seen in October, Leeds United recorded their first clean sheet of the season and made it four league games without a loss as they saw off Steve Cotterill's Portsmouth side 1-0. After conceding 15 goals already this season and 3 in each of their last two games there was a lot of pressure on the United defence which has been diabolical for a long time now. Leeds boss Simon Grayson switched the back four around by dropping Leigh Bromby who was particularly poor in the 3-3 draw with Brighton a week ago, he was replaced by Paul Connolly, a solid performer at right back who has been neglected since the victory over Bradford in the Carling Cup. Tom Lees, who had occupied the right back spot for the majority of the season so far, switched to his natural position of centre back to partner Darren O'Dea whilst the impressive Aidan White continued at left back.

There was a breath of fresh air in West Yorkshire as United's new look defence seemed so much more comfortable than previous combinations and the Whites looked to get a strong hold on the game at LS11. It was the recalled Paul Connolly, whom would later prove to be the Catalyst to Man of the match Robert Snodgrass' excellent performance who created the first real opportunity of the match after his cross was turned wide by a Pompey defender as Andrew Keogh looked to slot home his second goal in as many games. Soon after, Scotland International Snodgrass worked his magic down the right wing before teeing up fellow Scot Ross McCormack. Unfortunately for the Championship's top scorer the open net was guarded by a Portsmouth defender and his effort was deflected wide for a corner. From the resultant corner Leeds took the lead and it was the man making his second home debut for the club, Danny Pugh who put a smile on the Leeds fans faces that the glorious sunshine deserved. It was Snodgrass' inch perfect cross that was brilliantly guided home by former Manchester United man Pugh. 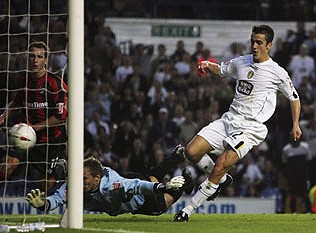 Danny Pugh netting for Leeds in his first spell at the club.

The Elland Road faithful could be forgiven for forgetting just how quality Robert Snodgrass is after a poor start to the season but the Glasgow born winger was providing a timely reminder with a brilliant display and it was his powerful effort that nearly provided Leeds with a 2-0 lead, however his shot flew marginally wide of Henderson's post. 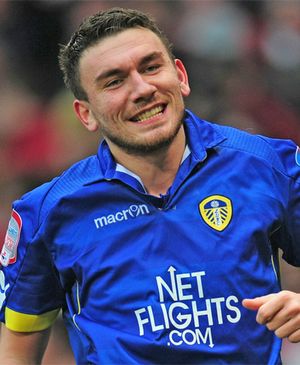 Snodgrass enjoyed his best performance of the season to date.

However, the oppositions customary big opportunity was not far away and Simon Grayson can thank Andy Lonergan and the Leeds United crossbar tonight after the former Preston man pulled a save out of the top drawer to stop the tall Greg Halford levelling the scores and seconds later Halford was again denied by the crossbar and United's much needed clean sheet was still in tact. Leeds 1-0 lead at half time was well deserved, however the start of the second period produced United's nerviest spell and the good mood the sunshine created couldn't deter the Bates Out chants at a time when their team needed their backing rather than more negativity. 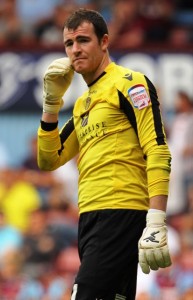 Andy Lonergan finally got the clean sheet his performances have deserved.

The second half didn't produce many chances for either side, Keogh pathetically turned a shot wide (he can't shoot) and later Mikael Forssell saw his solid effort turned wide by Henderson. Grayson shuffled his pack by replacing Keogh with Becchio, Forssell took the place of McCormack and Vayrynen came on for Snodgrass. United sat too deep and with their defensive record it brought inevitable tension. Liam Lawrence almost got lucky with a late effort that was tipped over by Andy Lonergan and there was a number of corners to deal with but full Credit to Paul Connolly, Tom Lees, Darren O'Dea and Aidan White, they were dealt with and despite a few nervy moments, Leeds are now only three points from fifth with a game in hand and recorded their fourth win at Elland Road in a row.

The man of the match today was without a doubt Robert Snodgrass for me, he was everywhere and put 110% in, when he plays like that it really is a joy to watch. Darren O'Dea's performance was also pleasing, Lees looked okay at centre back, Connolly was solid and White put in another good performance at left back. We have a very, very good squad, the likes of Ramon Nunez can't even get a place on the bench. Becchio can't get back in the starting line up and I personally am feeling very positive at the minute regarding Leeds United and long may it continue.