Prior to Kick-off Leeds announced the permanent signing of on-loan defender Andy O'Brien from Bolton. O'Brien who has made ten appearances since joining on loan signed a two-and-a-half-year contract once his current loan finishes. The game started slowly with both sides struggling to gain momentum to get that important first goal. The breakthrough came from the visitors, Julio Arca's corner to the near post was met by centre-half David Wheater who rose above the defence to nod past the helpless Kasper Schmeichel.

At half-time Middlesbrough looked good value for their lead, they defended well and didn't allow Leeds time to get the ball done and play. As the second-half unfolded Leeds once again failed to break down the Boro defence and changes were need to spark a comeback.

Simon Grayson made a double substitution in the 56th minute, Lloyd Sam and Neil Kilkenny replaced Max Gradel and Andy Hughes. The introduction of Sam lifted Leeds as they pushed for that all important equaliser. Ross McCormack saw his curling free-kick go just wide and Lloyd Sam dragged his shot the wrong side of the post after one of his typical mazy runs.

Leeds made their final substitution of the afternoon, Sanchez Watt replaced Robert Snodgrass who had picked up several knocks during the game. The equaliser came in the 91st minute, Argentine striker Luciano Becchio kept calm under pressure and volleyed the ball over the stranded Jason Steele. The Elland Road faithful were then demanding a second as Middlesbrough looked stunned after conceding so late. Less than a minute after Becchio's leveller Ross McCormack could have snatched all three points for Leeds. Sanchez Watt's cross was met by Ross McCormack but his header was wide of the mark. 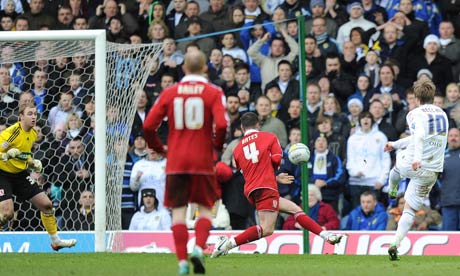 Middlesbrough have every right to feel they should have walked away with all three points, but Leeds never stopped trying even though you could see many of the players were out on their feet. Leeds now face a tough trip away to Cardiff on Tuesday before the FA Cup clash at Arsenal on Saturday.