Leeds versus Brentford. The bees can buzz off!

Share All sharing options for: Leeds versus Brentford. The bees can buzz off!

After an enthralling draw last weekend away at rivals Huddersfield Town, Leeds return to Elland Road and welcome Brentford.

The 2-2 scoreline meant that Leeds stayed in second place four point ahead of Charlton with a game in hand and after the rare luxury of a whole week without a match, Leeds should be raring to go. 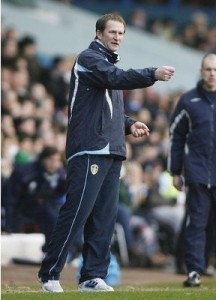 A point made by manager Simon Grayson commenting after his players had played 13 games in 42 days since January 16th.

Speaking on leedsunited.com Grayson said; "We've gave the lads Monday off, but they were back on Tuesday and there was a freshness.

"We needed that little break. We have a midweek game again next week (Tranmere away, our final game in hand) but this week has been good because it has been a break from the run of games."

The match against Brentford will not only see a fresh, rejuvenated squad but also some welcome additions.

After seemingly the longest trial in LUFC history, 37-year-old striker Paul Dickov finally sealed a short term contract until the end of the season.

The delay was due in part to a FIFA ruling saying that no player can play for more than two clubs in a season. After starting the season at Leicester, the former Scotland striker joined Derby on loan and then cancelled his contract at the Walkers Stadium.

Brief trials at Toronto FC in the MLS also gave him food for thought but now he's at Elland Road, and the new number 7 can't wait to get started; 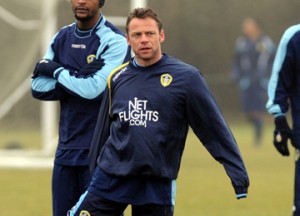 "I have a massive desire to succeed and if I get my chance, i'll try and take it with both hands.

"I've never kidded myself. I'll give my all and put pressure on defenders. I'm enthusiastic."

The gaffer has also suggested that Dickov's arrival will be nothing but beneficial to the club whether he plays many games or not.

"He's had a great career, he's got great ability, he's got a hunger and a desire, and his experience can only benefit us as a club and the younger players as well.

"He might not start every game, but he'll be pushing everyone and he will make a big contribution towards what we are looking to achieve.

"His experience will be important and some of the younger players will learn about movement and know-how."

Dickov played the full 90 minutes in the reserves match against Huddersfield at the Galpharm on wednesday and has already earned the nickname, "Benjamin Button" by the players. As his fitness levels only seem to have improved with age and is regularly beating his fellow team mates in running exercises and in practice matches.

Now as many Leeds fans know, Dickov has taken a fair bit of stick off us lot, particularly after an alleged rape trial of which he was cleared. Dickov says he's been aware of this and hopefully he can win us over. He'd better get going quick! His age has caused concern amongst some fans even if the players don't seem to agree!

Tresor Kandol also played in the reserves match and is over a hamstring problem and is fit for selection at the weekend.

One player who didn't feature midweek was Ben Parker.

The unlucky left back who has been dogged by injuries since going off after just half an hour of the opening match of the season looked set to start for the reserves on Wednesday.

But Simon Grayson said he picked up a knock on his knee earlier in the day meaning he had to pull out. Positively though it's not serious and he'll be fit next week and possibly ready to play again.

As for our opponents, Andy Scott's Brentford have been unlucky with having their last two games postponed due to waterlogged pitches.

Their match at Colchester and their home tie against Tranmere were both victims of the weather meaning it has been a couple of weeks since their last game.

The Bees currently sit in 14th place, not fully safe from relegation but with the cushion of a few games in hand, it's not a hugely worrying thought at the moment. 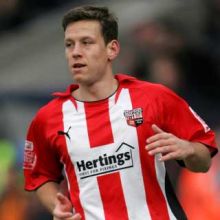 Striker Charlie MacDonald (pictured right) and winger Myles Weston both have 8 goals to their name in the league this season and will be the Bees' main threat.

Their last league result was a 2-1 win against Walsall and they held Leeds to a 0-0 draw at Griffin Park when the sides last met in mid December.

Leeds on the other hand go into the game with a somewhat renewed confidence after a convincing win against Oldham at Elland Road, followed up with a spirited second half performance against Huddersfield coming from behind to take the lead before succumbing to a late goal.

But it was the way they took the game to a team who were and still are unbeaten at home that impressed many. Leeds were just 10 minutes away form inflicting defeat on the Terriers and it was an away point many weren't expecting.

The match on Saturday is a must win though as Norwich are at home to Yeovil, Charlton are at home to bottom placed Stockport, Colchester play Brighton at home on Monday and Swindon travel to Bristol Rovers.

All bar Swindon's game are pretty much guaranteed wins and Leeds can't afford to slip and conceed ground to the chasing pack and also keep their eyes on top spot.

A win would also give confidence going into the even more crucial game in hand on Tuesday away at Tranmere.

If 1st down to 5th all win their games this weekend, then Leeds would be 4 points clear of Charlton in third going into that game.

A win at Prenton Park would extend their lead in second place to 7 points from Charlton, 8 from Colchester (with a game in hand) and 10 points ahead of Swindon (who will have two games in hand). And reduce the defecit behind Norwich to just two points.

But that can only be achieved if the Whites win tomorrow and hope that a bonus may come in one the teams around them slipping up.