Firstly I want to apologise for the lack of posting recently. I've been very busy recently doing MA dissertation work and having lessons for my driving test, which I passed last thursday :-) Hopefully things will return to a vague sort of normality.

Since i've been away, it's been a mixed bag of sorts for Leeds fans.

After another disappointing home result with the draw against Brentford, Tuesday night presented the opportunity to pull 5 points clear of third place Charlton with our game in hand against Tranmere Rovers.

Tranmere just outside the relegation zone presented a good chance of cemeting second place for now anyway, and for once Leeds ran out comfortable winners. 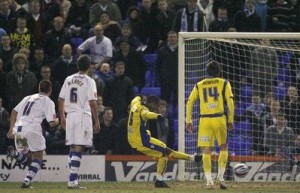 It was a dominant display at Prenton Park which led to a final score of 4-1 to Leeds.

Snodgrass with a free kick from the right wing luckily finding its way through past Luke Daniels on 6 minutes.

Beckford then made it 2-0 when Gary McSheffrey was unceremoniously hrought down in the box with a quarter of an hour gome and Beckford the resultant penalty away.

Tranmere got back into the match just 4 minutes later from John Welsh's scrambled effort after a pinball session in the Leeds box from a corner.

Leeds turned the screw and a fine counter attack just after the half hour led to a beautiful first time ball from Beckford on the right into Luciano Becchio who met it with a fine diving header, 3-1. 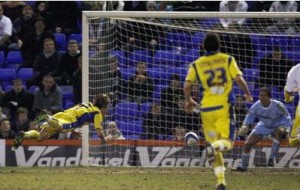 Then the game was settled with 66 minutes gone after a long ball from Micky Doyle set the pacy Beckford away past the back line and his delicate lob over Tranmere 'keeper Daniels sealed the 4-1 win.

There had been dominate performances from Leeds in the past few games but with very little reward, in this game Leeds got everything they deserved.

Then at the weekend a tough match at St Mary's awaited. Southampton have been on fire at their home ground putting teams to the sword with dominant goalscoring exploits from Lee Barnard and Rickie Lambert.

Play off contenders Huddersfield Town were put to the sword with a 5-0 hammering just recently. 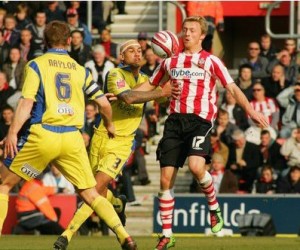 A full house, a fine pitch, lovely weather would seem to promise and end to end match but Leeds were outplayed and outclassed in both halves.

Boss Simon Grayson lamented his sides effort after admitting they could've been 3 or 4 down by half time. Luckily it was only one.

Former Leeds left back Dan Harding got the only goal of the match on 24 minutes finishing a the far post from a set piece. Had to be him didn't it.

And he ran to celebrate in front of the travelling support who in his time at Elland Road wasn't very well received. Revenge for him was sweet.

Responsibility for this change in fortunes is hard to pick out but one must look at the players and not the manager.

It was the same players who won so convincingly a few nights previously and even though this game was never going to be easy, the lack of any shots on target until the 92nd minute said alot.

It seems some players have delusions of grandeur still, a mentality which seems to take over everytime they win. A convincing performance seems to lead to some thinking to they can just turn up and win the next game cause they were so brillliant.

A delusion started after the Manchester United win and seemingly has never changed.

The frustrating thing is that we do have good performances in us. The performances against Brentford, Leyton Orient, Oldham, Colchester and Tranmere recently showed that we can play great football but without just rewards sometimes.

Grayson almost admitted after the game that the title was Norwich's after they went 7 points clear of Leeds with their 3-1 away win at Huddersfield. I think it has too. We're playing for second, Norwich are unstoppable.

The players need reminding of this fact now. The title was in their hands with a 11 point lead at the top at the end of December, which they have fettered away in the last 3 months to being 7 points adrfit.

Maybe a reminder of how they have thrown the title away will act as a reminder not to throw 2nd spot away. Losing that will be nothing short of disastrous and would lead to a derserved damning indictment of their season.

Luckily Charlton's 4-0 hammering at 5th place Millwall kept them 5 points behind, and Colchester also lost leaving them behind by 8 points. Millwall's win though means that they are 5 points behind Leeds like Charlton. But Leeds can help to keep them at bay with a win against them at Elland Road next Monday night.

Leeds also still have Charlton, Swindon and Norwich to come, so with the 5 point lead, it is still in Leeds' hands.

No doubt a match live on Sky against Millwall will get the players fired up and a win will be vital as all the other teams will have played by this point, so pressure could be applied to Leeds if the likes of Charlton, Swindon and Colchester get results.

Recent performances have shown that Leeds have good players who can peform maybe without their just desserts. If Southampton is anything to go by though, the matches upcoming against the top teams could end in disaster, as would their automatic promotion hopes.

And that would be the mother of all disasters.