Hartlepool 2 Leeds 2. Injury time heartbreak, do we have deluded fans?

Share All sharing options for: Hartlepool 2 Leeds 2. Injury time heartbreak, do we have deluded fans?

One point gained or two points lost. Every time your side has a draw this is always the first debate amongst fans.

Did we earn a point or throw two away? Is it a good point or a bad one? 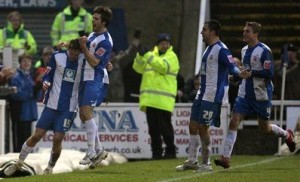 Looking at the stats going into the game its hard to say. Leeds only having one win in 2010 the previous saturday and Hartlepool having the same form.

Both teams struggling defensively and struggling for form it could've been anyones game.

"It's only Hartlepool!", "They're sh*t", "they're in a relegation battle!", or the most deluded of all, "we're Leeds United we shouldn't be drawing with teams like Hartlepool."

Now on deciding if a result was a good one or not, one must look at the game as a whole and on the basis of the situation in the league.

The idea is like most managers say, you take things one game at a time. And you sure as hell don't think under a misapprehension that just because of the name and the squad we have, we automatically should win.

Anyone wanting to challenge this should think back to Old Trafford. Hypocrisy doesn't set with me on this.

Looking at the match Luciano Becchio gave Leeds the lead with a header in the 22 minute following a Beckford cross. 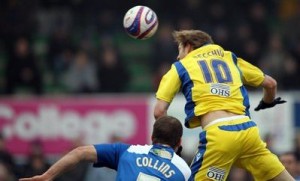 It stayed that way until the 70th minute when Adam Boyd levelled for the Monkey Hangers.

Just seven minutes later though Becchio again showed why people shouldn't forget about him in the striking department by making it 2-1. After his Spurs goal at Elland Road in midweek he was threatening to overshadow his now famous partner up front.

But the headlines were grabbed by Antony Sweeney who had a free header in the 93 minute from a free kick to send Victoria Park into sheer rapture. Many say it was a soft and dubious free kick but nethertheless, it wasn't dealt with.

So we first look at on the basis of the game, losing the lead twice is disappointing especially in injury time to sacrifice the lead, but the performance did merit more.

Looking at the big picture it's another point, it's another game without defeat and with Norwich finally losing and Charlton drawing, it's helped us gain ground on the leaders and keep that gap the same between the play offs, still with two games in hand.

So all in all disappointing but a point gained, another point towards promotion. Win your home games and draw your away games, its promotion form.

At this stage of the season and considering the run we've been on, i'll take the point. And yes i'm aware our opponents are in the bottom third and are on a poor run of form, but it's football, nothing is guaranteed. Remember January 3rd again?

So now with the league so important do we put emphasis on getting a trip to Wembley?

It's the second leg of the JPT Northern Area final in Carlisle tomorrow night (Tuesday). 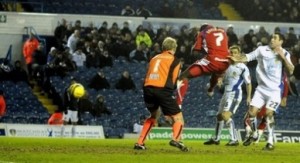 The Whites are 2-1 down after the first leg at Elland Road, Jason Crowe getting the solitary goal for Leeds. An unsuprising defeat in the midst of our bad 'FA Cup fatigued' run. Joe Ayinsah giving the Cumbrians the advantage going into the match at Brunton Park.

So do we go all out and try and get to the final and win it, or just concentrate on the league?

Well many fans are saying not to worry about it, play a reserve team and see what happens, if we get there, great, if not, oh well, its the league that matters.

But one shocking argument is that we shouldn't bother because it would be a stain on our clubs great history because its only the JPT, it's a cup only League One and Two teams play for. 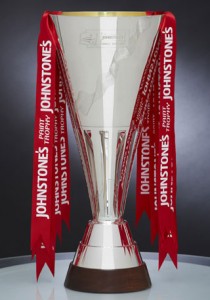 If we are the great name of Leeds United who should win every game in this 'crappy' league because we are Leeds United, then NOT winning the JPT would be a huge embarrasment because we will have lost out to another 'lowly' league one team who we should destroy in our path? Wouldn't it?

We have a generation of fans who only know or fully remember our days in the lower leagues, the chance for them to see their side win a trophy in Wembley is something not to be sniffed at.

Winning the competition then for those 'd' word fans should be the only acceptable thing because of who we are, I say we should win it because it's a trophy, it's a proud moment to see our club winning a trophy at Wembley.

We are a League One team in a competition of League One clubs, it would be an achievement because everyone is on the same playing field.

Would Manchester United say no to the Carling Cup? Would a team in the non-leagues say no to winning the FA Trophy just because it's a so called 'no mark' compeition. It's a trophy, it's a proud moment.

And lets face it, it's only two more games that are well spaced out, and it's not going to tire us dramatically like against premiership opposition, it won't affect our league form. It didn't in the early rounds did it? 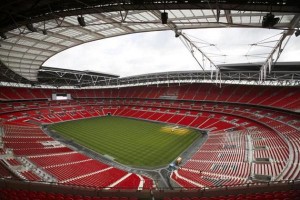 If we do get to Wembley and do win it, it will be a well earned trophy like any other and a proud moment because like winning any trophy you have beaten other teams to show dominance and you can proudly say your team was the best.

And like this weekend with Hartlepool showed, and the results with Exeter and Swindon showed, no result is for certain, and so winning a trophy like the JPT isn't certain because everyone is scrapping for the pride, the honour like anyone else on an even playing field.

Why can't we have that honour for once?